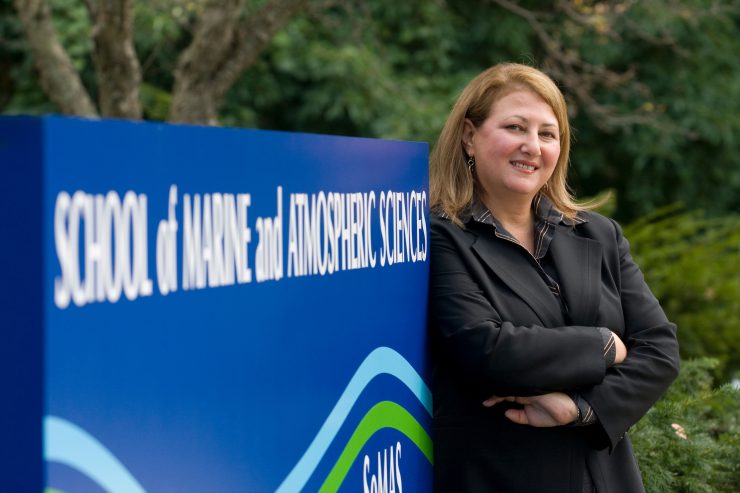 With more than 100 marine species recorded as extinct — primarily due to overfishing — and more than 100 million tons of fish taken out of the water each year, our oceans and the animals that call them home are badly in need of protection.

That’s why the Ocean Sanctuary Alliance (OSA) is leading the charge to conserve at least 10 percent of the world’s marine and coastal areas by 2020 and to ensure that ocean protection is effective and durable. It’s also why the Alliance is investing in the work of Stony Brook University professor Ellen Pikitch — one of the world’s leading experts in ocean conservation.

In recognition of her proven conservation track record and current portfolio of promising research, they’ve created the Endowed Professorship in Ocean Conservation Science in the School of Marine and Atmospheric Science (SoMAS). As the inaugural holder of the position, Pikitch will expand her transformational work while educating the next generation of leaders in ocean conservation.

“From the moment I met Dr. Pikitch in 2008, she has approached her role as a change agent with the extraordinary dedication and the highest scientific standards,” said Rosalind Walrath, the Alliance’s treasurer and a member of the Dean’s Council at Stony Brook’s School of Marine and Atmospheric Sciences. “Ellen is a truly powerful asset to the cause of ocean conservation.”

Pikitch, of course, is no stranger to effective advocacy based on impactful research. By the time she arrived at Stony Brook in 2008, her work had led to the passage of the U.S. Shark Finning Prohibition Act of 2000, the international ban on the trade of wild sturgeon caviar and the listing of beluga sturgeon as threatened with extinction under the U.S. Endangered Species Act. The research behind these policies originated from the Institute for Ocean Conservation Science (IOCS), which she established at the University of Miami in 2003 and relocated to Stony Brook when she joined the faculty in 2008.

“Endowed professorships help universities attract and retain the best scholars and researchers in their fields,” added Paul Shepson, dean of the School of Marine and Atmospheric Sciences. “Having Ellen Pikitch as the inaugural Endowed Professor in Ocean Conservation Science makes a powerful statement about the contributions that we aspire to make at Stony Brook, both to science and to the welfare of our planet.”

For her part, Pikitch recognizes the opportunities created by an endowed professorship — supported by an anonymous donor in addition to OSA — which will empower her to follow her instincts in pursuit of further advances.

“I am truly grateful to the donors, including the Ocean Sanctuary Alliance, whose philanthropy has made this endowed professorship possible,” Pikitch said. “The funding of an endowed professorship makes it possible to act quickly when inspiration strikes, and pursue novel solutions with potentially far-reaching significance.”

There’s also a certain fulfillment in continuing her work at Stony Brook, where the opportunities created for students resonate with Pikitch’s own experiences as a first-generation college student who attended the City College of New York tuition-free.

“Stony Brook is a fantastic university for the sciences,” Pikitch said, “and it’s a public institution. Without public support, I wouldn’t have even been able to go to college, and knowing that students at Stony Brook have similar opportunities is one more reason that I am so proud to continue my work here.”

As she blends her work to protect the world’s oceans with the education of future fisheries and conservation scientists at Stony Brook, Pikitch is making an impact that will be felt for generations to come.