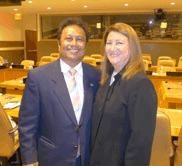 Renowned marine fisheries scientist Ellen Pikitch has been appointed by President Tommy Remengesau of the Republic of Palau to be his special advisor on Matters on Oceans and Seas.

Pikitch, director of the Institute for Ocean Conservation Science in Stony Brook’s School of Marine and Atmospheric Sciences, will serve in this role for one year. The honorable title reflects her dedicated effort toward assisting Palau on matters of ocean resource management and conservation.

As special advisor Pikitch will work closely with the Government of Palau, Palau’s United Nations Permanent Representative, and Palau’s Honorary Ambassador to the Oceans and Seas. This new position will enhance her ability to produce science-based solutions for sustaining Palau’s vital ocean resources.

Located in the western Pacific, Palau consists of more than 250 islands. Palauan culture and livelihood depend heavily on ocean resources for both subsistence fishing and tourism, especially snorkeling and scuba diving. Therefore, the deteriorating state of the world’s oceans put Palau at high risk. Depleting fish stocks, coral bleaching, and sea level rise are among the multitude of factors that must be considered when preparing a sustainable future for Palau. Palau was the first country to pronounce it’s national waters a “shark sanctuary” – a move that was later followed by several other countries. More recently, Palau declared its national waters to be a marine protected area – with 80 percent of the area prohibiting capture of all species in Palau’s waters.

“[Dr. Pikitch’s] contribution and efforts have been fundamental in realizing Palau’s many endeavors of creating and implementing sound policies toward the sustainable management of our greatest resource­­ – the Ocean,” President Remengesau wrote in his letter of appointment to Dr. Pikitch. “It is my hope that by working together, we can ensure that Palau’s resources, its economy, and the interests of its people are managed together sustainably into the future.”