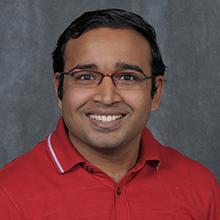 “The IBM Faculty Award is very prestigious, and represents IBM’s endorsement of our research,” he said. “In addition to helping drive our cloud autoscaling research, the award will further strengthen collaborations between our group and IBM Research.”

Gandhi was awarded $10,000 for his project, AutoScaling for Cloud Applications.

“This project aims to infer the resource requirements of opaque applications running in the cloud so as to enable online auto-scaling of the infrastructure to meet user-specified performance targets,” Gandhi explained.

According to Gandhi, the success of the project will significantly impact cloud adoption in private and public clouds. Small and medium businesses will find such a service attractive as it reduces the efforts they have to expend to efficiently leverage the cloud. The research will enable performance-sensitive application owners to adopt the cloud for their hosting needs.

The IBM Faculty Awards program is a competitive global initiative intended on fostering collaboration between leading universities and IBM’s research, development and service organizations. The program promotes innovative coursework to stimulate growth in disciplines and geographic areas that are strategic to IBM.

Gandhi joined the Stony Brook faculty this past fall semester. Prior to Stony Brook, he completed his postdoctoral research in the Cloud Optimization and Analytics group at the IBM T.J. Watson Research Center. He received his PhD in Computer Science from Carnegie Mellon University in 2013.

Gandhi’s academic interests include leveraging mathematical tools such as performance modeling, queuing theory and control theory to analyze the behavior of systems, such as distributed systems, cloud and data centers, in order to optimize performance, energy and power.

The highly competitive IBM PhD Fellowship Awards Program, which honors exceptional PhD students from around the world, has selected Bhushan Jain for the second year in a row.

Jain, who is advised by Professor Donald Porter in the Operating System, Security, Concurrency and Architecture Research (OSCAR) Lab, is a fourth-year PhD candidate in the Department of Computer Science at Stony Brook University. His academic interests include virtualization security, memory isolation, system security, trusted hardware, cloud security and storage.

The intensely competitive IBM PhD Fellowship Awards Program honors exceptional PhD students with an interest in solving problems that are important to IBM and fundamental to innovation in many academic disciplines and areas of study. This year awards were given primarily to students focusing on innovative technology that creates new business and social value, cognitive computing research, cloud and distributed computing technology and solutions, and fundamental science and technology.

Jain said he is currently “working on building a Linux container prototype to provide VM-like hardware based isolation to containers without sacrificing the container’s efficiency with very low overheads.”

Porter nominated Jain because he is a hard-working PhD student who has already shown promising research results in systems security, and he is very optimistic about Jain’s future prospects as a researcher.

“Bhushan worked for several years at IBM before joining the PhD program, has done three internships at IBM Research and continues to collaborate with a team at T.J. Watson,” Porter said. “Bhushan’s previous work includes improvements to the Linux setuid mechanism, as well as work on using virtual machine introspection to improve system security…Bhushan has made significant contributions to other projects.”

Jain said that he is honored to receive the IBM PhD Fellowship twice in a row. “Apart from the faith shown in me by the department and my advisor, I see this is an endorsement by IBM and my mentors at IBM for the research I do,” he said. Jain also added that he looks forward to collaborating with the IBM Research System Security Team. Learn more about Jain’s research and the OSCAR Lab.