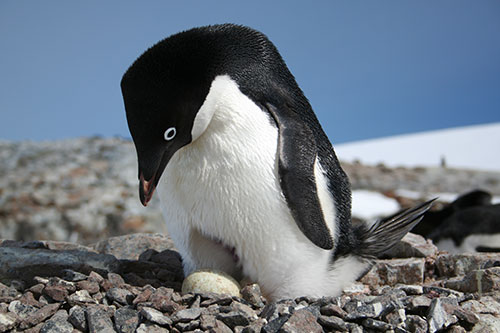 Tracking penguin populations in Antarctica is a critical component of understanding environmental changes in the region. Now, thanks to a collaboration between NASA and Stony Brook University, citizen scientists can lend a hand through the use of a new, interactive, and user-friendly website that tracks Antarctic penguin populations and provides information to scientists.

The tool, known as the Mapping Application for Penguin Populations and Projected Dynamics (MAPPPD) and available at www.penguinmap.com, is the first of its kind to give citizen scientists a lens into the world of scientists working to understand how environmental change, fishing, and tourism may be affecting Antarctica’s iconic birds.

“The launch of this website has the potential to greatly improve management and collaboration around the Antarctic,” said Heather Lynch, Associate Professor of Ecology and Evolution at Stony Brook University, who led the project. “MAPPPD contains data for approximately 1300 historical and current surveys in over 700 sites around the Antarctic continent. These data come primarily from published literature, though population estimates based on satellite imagery are also used by researchers and represents a growing component of MAPPPD’s utility.”

Lynch, along with Mathew Schwaller of NASA Goddard Space Flight Center, teamed up with Washington, DC-based NGO Oceanites, Inc. to develop the new website, which will allow scientists and policy makers to make conservation decisions regarding the Antarctic environment.

Antarctica has always been a challenging place to work, and penguin researchers have struggled to track populations of penguins breeding in Antarctica’s most remote areas. But recent developments in using satellite imagery from NASA and other sources have paved the way for a more complete understanding of where penguins breed and how their populations might be changing.

While the satellite imagery cannot detect the penguins themselves, it can detect the large guano stains the penguins produce while incubating their nests. Lynch and her team have been able to use the imagery to locate new colonies of penguins that no one knew existed, some of which are among the largest in the world.

Lynch also explained that researchers with data to contribute to MAPPPD have a variety of ways to do so, as do keen-eyed tourists who, in the summer months, actually outnumber scientists in the region and can contribute important information through bird checklists and photographs.

Additionally, MAPPPD’s utility as a data hub for Antarctic penguin biologists will grow as new datasets are uncovered and can be integrated into population models that both describe past trends and may be used to predict future trends.

The easy-to-use interface includes a number of informative outputs that are immediately available for environmental impact assessments or scientific reports. The website also contains fact sheets on the four penguin species for which count data are available, links to relevant publications, and information about how users can contribute their own data.

For MAPPPD partner and end user, Oceanites, Inc., the website is a new tool for its Antarctic inventory project. “MAPPPD will immediately assist a wide range of Antarctic stakeholders, from other researchers and governments to NGOs and the public at large,” said Oceanites Founder and President Ron Naveen.

The Stony Brook University College of Arts and Sciences is now accepting submissions for its annual Artists, Authors, and Editors celebration