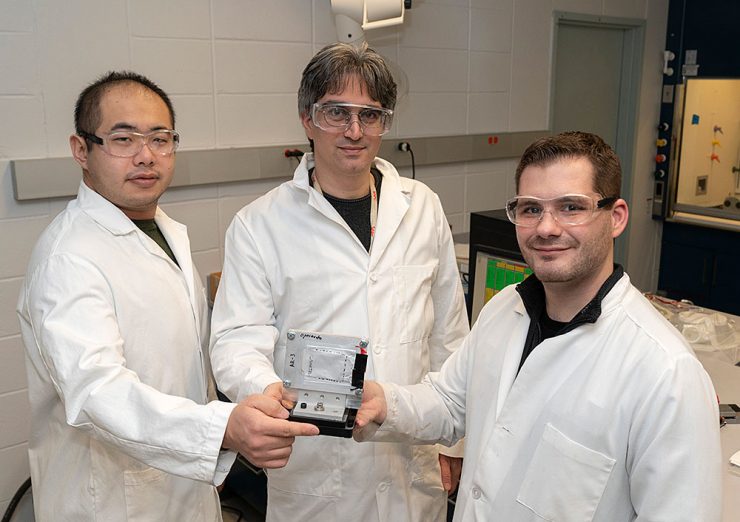 Peter Khalifah, a professor in the Department of Chemistry at Stony Brook University, and graduate students Zhuo and Gerard Mattei are among a group of scientists that has identified the primary cause of failure in a state-of-the-art lithium-metal battery, which is of interest for long-range electric vehicles. Khalifah holds a joint appointment in the Chemistry Division at Brookhaven National Laboratory and is an author of the research that has been reported in Chemistry of Materials.

Using high-energy x-rays, the team followed the cycling-induced changes at thousands of different points across the battery and mapped the variations in performance. At each point, they used the x-ray data to calculate the amount of cathode material and its local state of charge. These findings, combined with complementary electrochemical measurements, enabled them to determine the dominant mechanism driving the loss of battery capacity after many charge-discharge cycles. Depletion of the liquid electrolyte was the primary cause of failure. The electrolyte transports lithium ions between the rechargeable battery’s two electrodes (anode and cathode) during each charge and discharge cycle.

“The big advantage of batteries with anodes made of lithium metal instead of graphite, the material typically used in today’s batteries, is their high energy density,” explained Khalifah. “Increasing the amount of energy that a battery material can store for a given mass is the best way to extend the driving range of electric vehicles.”

Since 2017, the Battery500 Consortium — a group of national labs and universities — has been working to develop next-generation lithium-metal anodes with an energy density three times higher than that of current automotive batteries. However, getting lithium metal to work well as an anode in a continually cycling rechargeable battery with a high energy density is extremely challenging. Lithium metal is very reactive, so more and more of it degrades as the battery cycles. Over time, these degradation reactions consume other key battery parts, like the liquid electrolyte.

Early on in their development, high-energy-density lithium-metal anodes had a very short lifetime, typically 10 cycles or less. Battery500 Consortium researchers improved this lifetime to 200 cycles for the battery cell studied in this work and, more recently, to 400 cycles in 2020. Ultimately, the consortium seeks to achieve lifetimes of 1,000 cycles or more to meet electric vehicle needs.

“How can we make high-energy-density lithium-metal batteries that cycle for a longer time?” said Khalifah. “One way of answering this question is to understand the failure mechanism in a realistic “pouch cell” battery. That’s where our work, supported by the Battery500 Consortium, comes in.”

The research is the result of a successful collaboration among Brookhaven National Lab, Idaho National Lab and Pacific Northwest National Lab. In future studies, the team plans to map the changes occurring while the battery charges and discharges.