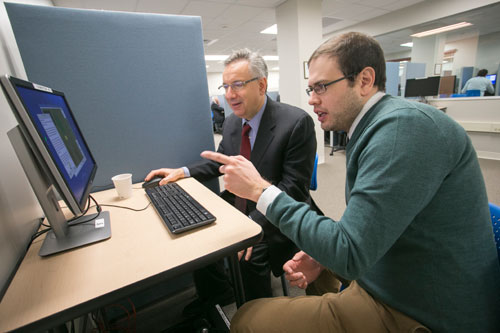 The CBPE Laboratory provides space for an interdisciplinary group of social scientists — faculty, graduate students and postdoctoral scholars — to study political and economic institutions across topics like social preferences and individual behavior by conducting experiments using a network of 30 partitioned computer stations.

“For political science, this lab fills a missing piece — experimentation,” said Political Science Professor and CBPE Director Matthew Lebo. “Alongside the Center for Survey Research, Stony Brook is cornering the market on such experimentation in social science, making it possible for a department as small as ours to engage students to become leaders in their field.”

The lab itself serves as the centerpiece for a Behavioral Political Economy (BPE) hiring cluster started by Lebo in 2012, which brought new faculty in Political Sciences, Economics, the College of Business and Psychology to Stony Brook. Experimentation in BPE allows such faculty and scientists to observe actual market behavior instead of relying on theoretical assumptions.

“One by one, they accepted various esteemed positions at other universities. We tried replacing those scholars, but there wasn’t any center of gravity for them,” said Segal. “What could we do that would encourage Political Economy people to stay at Stony Brook?”

The new CPBE Laboratory will be that center of gravity.

“We undertook a similar initiative at Oxford eight years ago, and it’s been a real success,” said Professor Raymond Duch, Official Fellow and Director of the Centre for Experimental Social Sciences at Nuffield College, University of Oxford who served as the event’s keynote speaker. “It’s had a big impact on faculty research, and become a valuable resource for undergraduate and graduate students. I think this is a great idea and it will have a major impact on Stony Brook research.”

Peter DeScioli, assistant professor and co-associate director of the CBPE, demonstrated a live experiment using the lab’s equipment and space, which includes a separate room to observe and discuss real-time results data.

Attendees were invited to join the experiment, during which subjects sat individually at the lab’s computer stations and, with little instruction, controlled cartoon avatars in a virtual world collecting berries from shrubs and competing against each other for survival. When one participant encountered another, they were given three options: Smile, flee or head-butt.

On the sideline, DeScioli revealed the experiment’s objective is to observe the foundations of human property conventions, and explore why humans have an innate concept of ownership.

“The CBPE Lab is a great environment for observing people competing for resources,” DeScioli said.

When the virtual battle for berries was done, results were shown to the group, which immediately sparked multiple conversations among students, faculty and visiting experts about topics including international conflict scenarios.

“Today is a truly joyous occasion for the College of Arts and Sciences, Political Science, the College of Business, Economics, Psychology and many more departments,” said Provost and Senior VP for Academic Affairs Dennis Assanis.

To learn more about the CBPE Laboratory and sign up to participate in a research study, visit stonybrook.edu/commcms/cbpe/laboratory.