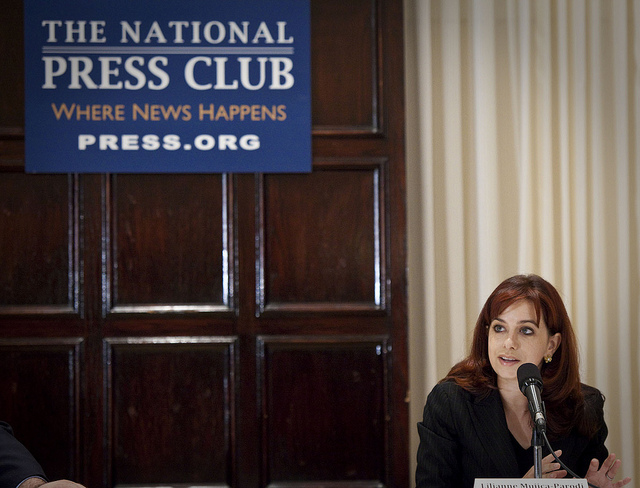 Lilianne R. Mujica-Parodi, Assistant Professor of Biomedical Engineering in Stony Brook’s School of Medicine and Director of the Laboratory for Computational Neurodiagnostics, has received the prestigious Presidential Early Career Awards for Scientists and Engineers (PECASE), the highest honor bestowed by the U.S. government on science and engineering professionals in the early stages of their research careers. She received the award on Thursday, October 13, with 93 other scientists and engineers at a ceremony held at the Smithsonian Institution National Museum of Natural History in Washington, D.C.

Prior to receiving her award, Mujica-Parodi was one of nine PECASE Award winners to participate in a media roundtable hosted by The Science Coalition (listen) at the National Press Club on Wednesday, October 12. The roundtable was moderated by Adam Belmar and included a comprehensive discussion about the value received by the nation and society in general from investing public money into scientific research. Also participating in the discussion were university early-career scientists and engineers from Johns Hopkins, Ohio State, Columbia, UC Irvine, University of Wisconsin-Madison, North Carolina State, University of Illinois at Urbana-Champaign and UC Santa Barbara.

Following the roundtable, Mujica-Parodi* attended a special ceremony hosted by the National Science Foundation (NSF) at its headquarters in Arlington, Virginia, to honor the 21 PECASE awardees recognized for their NSF-funded research.

After receiving the PECASE Award from the President’s Science Advisor, John Holdren, Director of the Office of Science and Technology Policy (OSTP), Mujica-Parodi and 15 other PECASE recipients discussed national science policy at the White House Conference Center with Kevin Hurst, OSTP Assistant Director for Energy Research and Development, and Altaf Carim, OSTP Assistant Director for Nanotechnology. Following this meeting, Mujica-Parodi and her colleagues met President Barack Obama at the White House.

“I was personally galvanized by the level of commitment to scientific and technological innovation that President Obama and his policy advisors demonstrated during our visit,” said Mujica-Parodi, who is the third researcher from Stony Brook University in the past three years to win this award. “This has truly been one of the most beautiful and powerful experiences in my life,” continued Mujica-Parodi, whose research**, supported by the NSF and Department of Defense, develops advanced neuroimaging capabilities based upon control systems engineering and chaos theory to identify circuit-wide dysregulation in the human brain. Her citation is for “outstanding research in the application of complex systems analysis to neurodiagnostics of mental and neurological illness, and for the development of a K-12 curriculum in control systems modeling.”

“It is inspiring to see the innovative work being done by these scientists and engineers as they ramp up their careers—careers that I know will be not only personally rewarding but also invaluable to the nation,” President Obama said in the official White House announcement. “That so many of them are also devoting time to mentoring and other forms of community service speaks volumes about their potential for leadership, not only as scientists but as model citizens.”

The PECASE Awards were established by President Clinton in 1996 and are coordinated by the OSTP within the Executive Office of the President. Scientists and engineers are chosen based on their pursuit of innovative research at the frontiers of science and technology and a commitment to community service as demonstrated through scientific leadership, public education, or community outreach.

About Lilianne Mujica-Parodi
Mujica-Parodi received her undergraduate and graduate degrees from Georgetown University and Columbia University, respectively, studying mathematical logic and physics. After her Ph.D. in Philosophy (Niles G. Whiting Fellow), she completed a three-year National Institutes of Health Fellowship in schizophrenia research at the New York State Psychiatric Institute. She was subsequently promoted to Assistant Professor of Clinical Neuroscience at Columbia University‘s College of Physicians and Surgeons, where she performed research for two years until being recruited by Stony Brook. She is the recipient of the NSF’s Career Award as well as the National Alliance for Research in Schizophrenia and Affective Disorders Young Investigator Award (Essel Investigator). Her research interests focus on computational neurodiagnostics for neurological, psychiatric, and stress-related disorders, using functional magnetic resonance imaging and near-infrared spectroscopy.