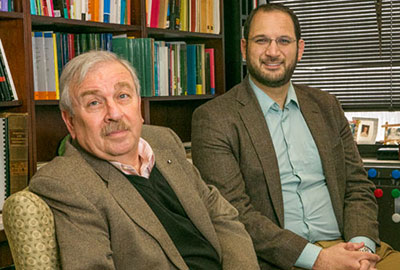 Last year, two Stony Brook faculty members joined forces to transform how experts around the world study communication and autism. Now with two major meetings under their belts, projects are underway and progress is in sight.

Mark Aronoff, SUNY Distinguished Professor of Linguistics, and Matthew Lerner, Assistant Professor of Psychology, Psychiatry and Pediatrics and Director of Stony Brook’s Social Competence and Treatment Lab, were the principal organizers of the second meeting of the Consortium on Autism and Sign Language (CASL), sponsored principally by the Exploratory Fund of the American Academy of Arts and Sciences and hosted by the American Academy of Arts and Sciences, Dec. 12-13, 2015 in Cambridge, Mass.

“This meeting featured close to twice the number of presenters at the inaugural meeting from a wide variety of disciplines, including Fellows of the Academy,” said Aronoff. “Several possible collaborative projects emerged from the meeting that, we expect, will broaden and strengthen research into the distinguishing characteristics of autistic communication.”