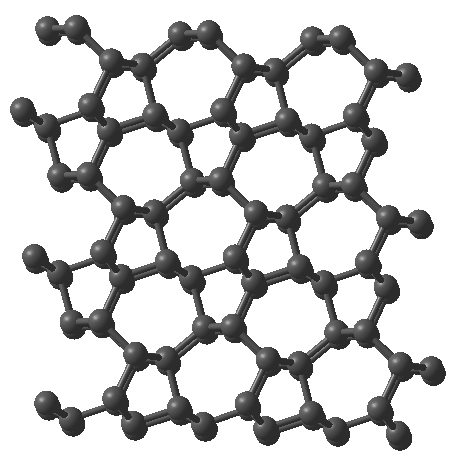 An international team led by Artem R. Oganov, a professor of theoretical crystallography in the Department of Geosciences at Stony Brook University, has established the structure of a new form of carbon. The results of their work, “Understanding the Nature of Superhard Graphite,” were published June 26 in Scientific Reports, a new journal of the Nature Publishing Group.

Oganov and his team used a novel computational method to demonstrate that the properties of what had previously been thought to be only a hypothetical structure of a superhard form of carbon called “M-carbon” — constructed by Oganov in 2006 — matched perfectly the experimental data on “superhard graphite.”

“Most of the known forms of carbon have a colorful story of their discovery and a multitude of real or potential revolutionary applications,” said Oganov. “Think of diamond, a record-breaking material in more than one way. Think of graphene, destined to become the material of electronics of the future. Or of fullerenes, the discovery of which has started the field of nanoscience.”

“The experiment itself is simple and striking: you compress black ultrasoft graphite, and then it suddenly turns into a colorless, transparent, superhard and mysterious new form of carbon: ‘superhard graphite,’” said Oganov. “The experiment was repeated several times since, and the result was the same, but no convincing structural model was produced, due to the low resolution of experimental data.”

Using his breakthrough crystal structure prediction methodology, Oganov in 2006 constructed a new low-energy superhard structure of “M-carbon.” That work resulted in a stream of scientific papers that within two years proposed different “alphabetic” structures, such as F-, O-, P-, R-, S-, T-, W-, X-, Y-, Z-carbons. “The irony was that most of these also had properties compatible with experimental observations on ‘superhard graphite.’ To discriminate between these models, higher-resolution experimental data and additional theoretical insight are required,” he said.

According to Oganov, the reason why diamond is not formed on cold compression of graphite is that the reconstruction needed to transform graphite into diamond is too large and is associated with too great an energy barrier, which can be overcome only at high temperatures, when atoms can jump far. At low temperatures graphite chooses instead a transformation associated with the lowest activation barrier.

One could establish the structure of “superhard graphite” by finding which structure has the lowest barrier of formation from graphite. To do that, Oganov, his postdoctoral associate Salah Eddine Boulfelfel, and their German colleague, Professor Stefano Leoni, of Dresden University of Technology, used a powerful simulation approach, recently adapted to solid materials, known as transition path sampling. These simulations required some of the world’s most powerful supercomputers, and finally proved that “superhard graphite” is indeed identical to M-carbon, earlier predicted by Oganov.

“These calculations are technically extremely challenging, and it took us many months to perform and analyze them. Searching for the truth, you have to be prepared for any outcome, and we were ready to accept if another of the many proposed structures won the contest. But we got lucky, and our own proposal, M-carbon, won,” said Oganov.

Another result of this study is a set of detailed mechanisms of formation of several potential carbon allotropes. These could be used to engineer ways of their synthesis for potential technological applications.

“We don’t know yet which applications M-carbon will find, but most forms of carbon did manage to find revolutionary applications, and this amazing material might do so as well,” said Oganov.

Please click here for a short video by Salah Eddine Boulfelfel on the “New Carbon Allotrope at High Pressure” from the Artem Oganov Lecture Series.