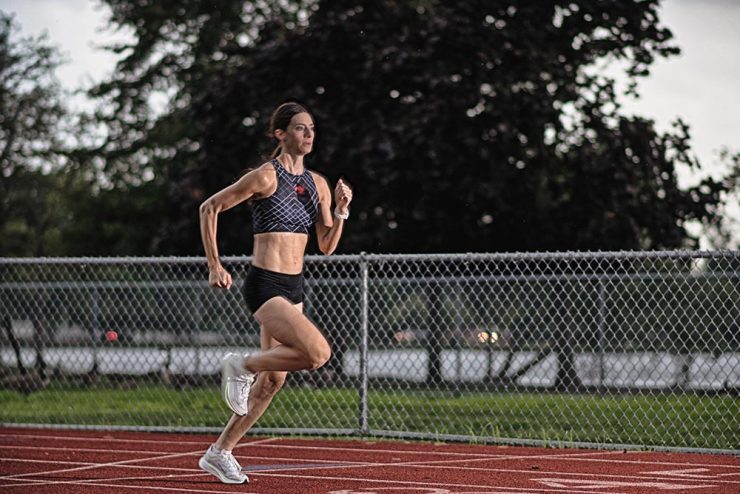 You’ve almost certainly heard the phrase “it’s a marathon, not a sprint” – a metaphor used to describe something that’s long and grueling, requires discipline and endurance, and rewards those who can look past short-term gratification in their quest for long-term accomplishment.

As it turns out, training for an actual marathon is in many ways its own “marathon.” Just ask Gabrielle Russo, Stony Brook University Assistant Professor of Anthropology. To be clear, she’s not training for just any marathon, she’s training for the 2020 US Olympic Marathon Trials, a race where the top three men and women finishers represent the United States in the summer 2020 Olympics in Tokyo.

To compete at the trials, runners must meet a qualifying time standard of 2:45. Russo earned her way with a qualifying time of 2:44:51 at the Philadelphia marathon in November 2018 – keeping her dream alive by a scant nine seconds. Only a few hundred women in the entire nation will compete for these three spots; earning the golden Olympic Trials Qualifying ticket is considered an honor in itself.

So far her Olympic Trials quest has been a two-year affair with marathons that began when she completed the Long Island Marathon in May of 2017. Under the coaching of Tommy Nettuno, it’s a quest that will continue until at least February, when the qualifying race takes place in Atlanta on Leap Year Day, February 29, 2020.

Although somewhat new to marathon racing, Russo’s running story actually began as a high schooler in East Stroudsburg, PA, where she was a sprinter and hurdler – and good enough to still hold some local records and a spot in her high school’s Athletic Hall of Fame. She continued her passion at Dickinson College where she ran both track and cross country, and where she would take the class that would open the door to her future career.

“I always had an interest in anatomy,” said Russo. “Sophomore year I found my way into an Introduction to Biological Anthropology class and that was it — from that point on there was no plan B.”

Though it set her on the path to what would become her career, the epiphany would also take her off the road. Russo would take nearly a decade off from running as she pursued graduate school, earning her PhD at the University of Texas at Austin in 2013, completing two post-doctoral positions, and then joining the Stony Brook faculty in the Fall 2014 semester. She initially lived in bustling Manhattan and then Queens, but eventually moved to the more open spaces of Long Island. Once there, she quickly joined the nearby Sayville Running Club and dusted off her running shoes.

“Running is almost spiritual to me, it gives my life something that nothing else can,” she said. “It can also be a form of relaxation and meditation, which certainly served me well through my first year in a tenure-track position.”

And if you thought it might be difficult to balance the responsibilities of being an anthropology professor and a competitive distance runner, Russo will tell you otherwise.

“The more I ran, the more I saw that my passion for my career and my passion for running worked in sync,” she said. “Together they make me who I am as a whole. The traits that make me good at one make me better in the other.” Eventually these two aspects of her life began to merge more wholly.

“There was a story in the local paper after I won the Suffolk marathon and Frederick Grine, my department chair, came to my office with a copy to congratulate me,” she recalls. “Since then there’s been an outpouring of support and encouragement from my department and the university. It’s incredible, and I’m so grateful.”

Seeking to push herself even further, Russo began competing in ultramarathons – which are any races longer than a typical 26.2-mile marathon. She would eventually complete a 50-mile ultramarathon (the JFK 50), finishing sixth overall in the women’s division. It was after that remarkable achievement that she set her sights on the 2020 Olympic Trials and earned a spot on her running team, Rabbit. Her training as a scientist would come to play an important role.

“The skill sets, a scientific approach, and mastery of organization relevant to my career have also helped me in my running,” she explains. Her knowledge of anatomy and biomechanics have informed her training. And, as you might expect, her days are tightly scheduled. Russo gets up between 4:00 and 4:30 am to be able to complete a morning workout, then takes on the work day and finishes with another workout in the evening.

“I schedule workouts like I do any other appointment,” she said, regarding the interweaving of her career and running. “When you integrate them like that it helps you to see yourself as living one life and to get it all done.”

That life also includes summer field research as part of her role as co-director of the Napudet Research Project, where she works with paleoanthropologist Isaiah Nengo, associate director of the Turkana Basin Institute in Kenya’s Turkana Basin, searching for ape fossils dating to the Miocene period (~23 – 5 million years ago) that will help answer questions regarding ape – and thus our own — evolution.

Russo returned from her season of fieldwork this past July leaving just under six months to prepare for the trials. She started her training as soon as she returned, simultaneously teaching a second session summer course and beginning analyses on her fossil findings from the field season.

She also looks to become just the third member of the Stony Brook community to compete in the Olympics, following alumni Lucy Van Dalen ’12, who ran the 5000 meter representing New Zealand in the 2012 Olympics in London, and the late Roger Gill ‘94, a sprinter who represented Guyana in the 1996 Olympics in Atlanta. Follow Professor Russo and her journey to the Olympic Marathon Trials on Instagram @gogogabbygams.