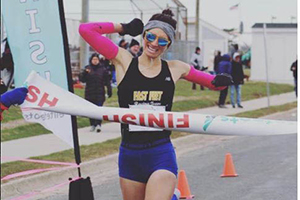 Scientist. Athlete. On May 6, 2018, Gabrielle Russo took first place in the women’s division of the Long Island Marathon with a personal best time of 2:50. Russo signed up for the race just the day before, viewing the race as an opportunity to “empty the tank” after a long racing season that included the Boston Marathon only three weeks prior and a 50K in March.

An assistant professor in the College of Arts and Sciences Department of Anthropology since 2014, Russo moved to Long Island in 2016 after commuting for two years from Manhattan, and later, Queens. A runner in both high school and college, she took a long hiatus from competitive racing as she began graduate work, followed by two postdocs (at Northeast Ohio Medical University and New York University), focusing on building her career. Settling in the suburbs, Russo felt it was time to reconnect with her previous pastimes.

“The running community on Long Island is very active, and the Greater Long Island Running Club (GLIRC) welcomed me with open arms,” Russo said. “As a nomadic academic for nearly a decade, the sense of community and family I found with GLIRC is very important to me.”

In May 2017, Russo raced her first competitive marathon – the Long Island Marathon – a step in a two-year plan she outlined to eventually qualify for the NYC marathon.

She crushed it, as second woman to cross the line with a finish time of 3:05, qualifying for NYC by more than five minutes.

In the year since, Russo has had an impressive track record, including first female in the Suffolk County Marathon last October, and the USATF 50K Road Championships this past March.

What began as an outlet has made Russo a better academic. “When I first came back to running, I saw my life as compartmentalized into multiple selves – academic and athlete,” Russo said. “Over the last year, I’ve realized that the things that make me a great scientist feed into what makes me a great athlete and vice versa. Being disciplined and strategic, plus having a scientific background in anatomy, has improved my athletic training and performance. On the other side of the coin, I feel more engaged with my students and lab as I have an enhanced sense of camaraderie .One doesn’t eclipse the other, my whole self is better.”

Since January, Russo has also served as co-PI, along with her colleague Isaiah Nengo (associate director of the Turkana Basin Institute [TBI]) at Napudet, a site in the Turkana Basin in northern Kenya. She’ll return to the site in June for a month, and looks forward to being out in the field and relishing her academic work. Asked what her training will be like in the desert, Russo said that her coach, Thomas Nettuno, is working to create a cross training plan consisting of a lot of plyometrics, strength training, and some easy miles.

“It’s very hot – a typical dry, sandy desert that’s a bit hilly in some places” she says. “I’ll focus on the basics like mechanics, and of course, there is a whole catalog of field gear you can buy for running in those conditions!”

When Russo returns from the field, she’ll begin a more rigorous training program in preparation for her fall goal race – either the Chicago Marathon, or Steamtown in Scranton, PA. She’ll also run some smaller races including 5Ks and half marathons.

“Apart from being a star at running marathons, Gabrielle also runs a top notch research lab, offers great courses, and her students love her – she’s a wonderful person,” says Frederick Grine, distinguished professor and chair of the Department of Anthropology. “Everything she does, she does at the top of her game.”

What’s on the horizon for this scientist/athlete? Olympic Trials hopeful. Russo’s athletic quest is to qualify for 2020 Olympic Trials, to be held in Atlanta, GA. Qualifying for the trials is prestigious in and of itself, and she is nearly there (the required time to qualify for the “B” standard is 2:45:00). Shaving five minutes from her personal best will be a deliberate process, she says.

Russo has been chronicling her journey and transformation on Instagram, a diary of sorts that has garnered the attention of sponsors looking to engage with those who are active in running communities both locally and nationally. She was recently selected to represent the running apparel brand, rabbit, Follow Professor Russo and her journey on Instagram @gogogabbygams.