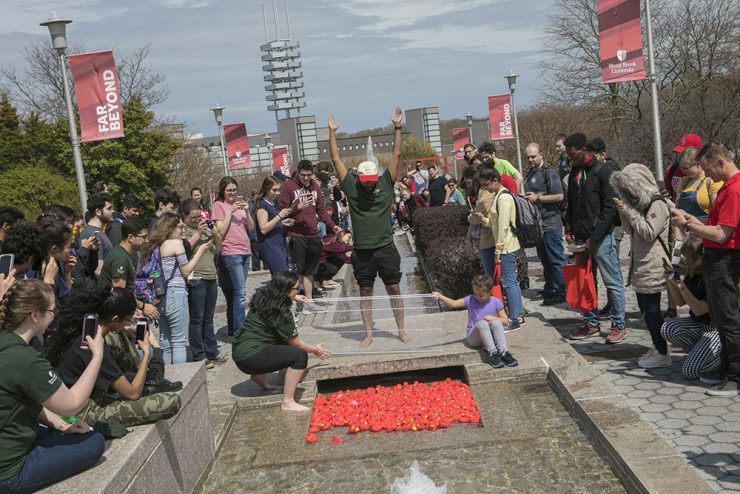 Throughout the week, faculty and outside guest speakers shared their expertise with the campus community on earth-related topics ranging from pollution to global warming.The annual festival is intended to promote environmental education and increase awareness of the challenges our planet faces today

The highlight of the week was the day-long fair, which included musical performances, a farmers market, exhibitors, vendors, and the traditional duck race at the Brook.

While the rain forecast forced the annual outside event indoors, it didn’t dampen the energy and festive atmosphere inside the Student Activities Center. Student clubs and outside organizations, such as the National Park Service and Car Free Day Long Island, packed the ballrooms, handing out free plants and teaching students about sustainable practices and local wildlife. People in colorful costumes rode unicycles through the halls, while Sayville singer/songwriter and band leader of Jack’s Waterfall, Jack Licitra, serenaded guests with his banjo. On stage in the main ballroom, Pete Moss and the Fertilizers entertained a crowd of all ages, including students, faculty, and families from the local community.

Adding to the festivities was Mark Lang, a member of the Earthstock planning committee, who walked through the fair greeting guests in his shark costume. The shark is the unofficial mascot of Stony Brook’s School of Marine and Atmospheric Sciences, which is dedicated to environmental research and education.

“It’s a lot fun,” Lang said, reflecting on his experience wearing the costume. The goal is to “promote our marine science education and make people think about shark conservation.”

Many of the student clubs represented at the fair had similar goals, hoping to inspire conversations about sustainability and protecting the earth. For the Environmental Club, Earthstock is just a small part of what they do throughout the year and a special way to get fellow students involved in their work. Anisha Sigh ’21 hopes that by learning about the club, students will consider joining them at beach cleanups and sustainability workshops.

“At school, it’s really hard to be sustainable so we provide some solutions,” Singh said. “We tell you how to make your own toothpaste or deodorant. We make a lot of sustainable things that you can reuse, like these beeswax wraps you can put over containers instead of using plastic wrap.”

Like the Environmental Club, the Greenhouse and Gardening Guild also meets weekly. At Earthstock, student members were selling succulents they had grown throughout the semester at the greenhouses near the Life Sciences building.

“Everyone nowadays looks at their phones and doesn’t really interact with nature, so it’s really nice to have a little piece of nature in your house,” said Katie Law ’20, who was selling the plants.

Law hopes the club will create a community for students to learn about growing herbs and vegetables right here on campus.

Another visitor, Sweetly Bishnoi, had a similar goal, but her focus was on gardening at home. That was why she had brought her very young son to explore the festivities.

“I plant many things at home, and I want him to do the same,” she said.

Another local Long Islander and Stony Brook alum, Tania Velazquez, brought her two daughters after hearing about the event on Facebook. Lily, age 8, who was off from school for Spring Break, had a great time learning about Native Americans and their sustainable lifestyle.

“I hope my girls take away a respect of the environment,” Tania said.

Pamela Smolder ’20 and her friend Michelle Zaslofsky ‘20 were also thrilled: “It’s one of my favorite events and we’ve come every year since we were freshmen. I like what it stands for. It’s a very good message, and it’s fun cause there’s a lot of free stuff.”

By the afternoon, the sun was shining, and new visitors and old made their way to the Brook near the Administration Building to watch the Duck Race, a uniquely Stony Brook tradition. Participants could buy a duck and enter it into the competition, cheering it on toward the bottom of the little waterfall. All purchases benefitted the Stony Brook Foundation.

“This is my first time,” said Sejal Mehra ’21. “We saw little ducks float down the Brook – which was hilarious! I had a great time. I think I will come back every year until I graduate and bring my friends.”

In light of the dire challenges facing the planet, faculty member and academic co-chair of the Earthstock Committee, Dr. Jeffrey Levinton says that the event has a deeper purpose beyond the fun:

“It’s a festival, and people like festivals,” Levinton said. “Nobody wants to be told that the world is going to go off a cliff. They want to feel a celebration and that there’s something worth saving and a way of saving it. So that’s the message I want to convey – there’s a world that’s worth saving; it’s a diverse, wonderful world, but there are also things that need to be done, and they can be done.”

Levinton hopes that the diverse exhibitors showcase the variety of problems facing the world and the wide array of solutions available. But looming above all, Levinton says, is climate change.

That’s why the keynote speaker for the afternoon was Dr. Michael Mann, one of the brightest minds in climate change research. His talk, “Return to the Madhouse: Climate Denial in the Age of Trump,” was upbeat and satirical but ultimately focused on criticizing climate change deniers in the political arena.

Despite the urgency of these concerns, Mann said events like Earthstock give him hope.

“I stay optimistic in the world of climate change denial because of the youth and by meeting with college students,” Mann said. “Students demand and seek change, and it always starts with college campuses.”