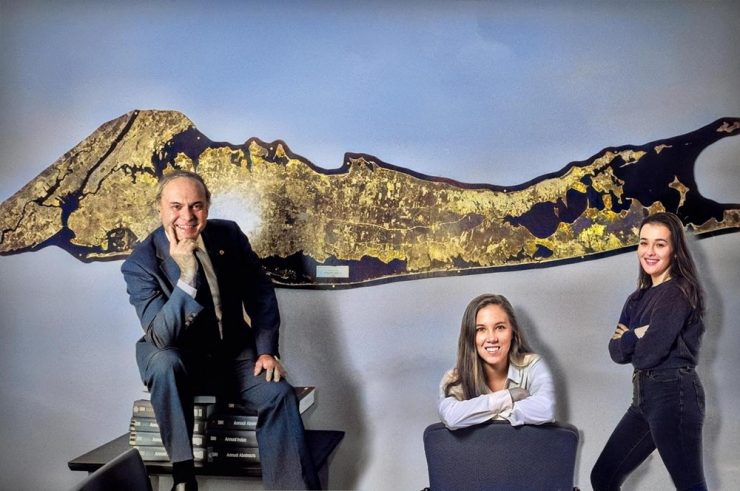 Anyone who lives, works or attends school on Long Island has Lee Koppelman to thank for the quality of life they enjoy. As director of the Suffolk County Planning Department for 28 years (1960-1988) and the Nassau-Suffolk County Regional Planning Board executive director for 41 years (1965-2006), Koppelman played an immense role in balancing planned growth and environmental preservation in one of the fastest growing regions in the United States.

Koppelman’s life and work is being celebrated in a short documentary Koppelman, the work of two students enrolled in the School of Marine and Atmospheric Sciences (SoMAS) at Stony Brook University. That film will be screened for the first time at 120 Endeavour Hall on Friday, September 20 at 5:30 pm. The film’s subject, and a host of University personnel will be on hand to join in the celebration.

The two scholars described themselves as “the test subjects of a new form of coursework in the Environmental Humanities major and minor that is designed to give students new sets of skills and experiences they can use for their careers, graduate school and post-Stony Brook lives.”

Not only had Gallagher and Smith never met before they embarked on the daunting assignment, they had no idea of who Koppelman was — understandably, since much of his pivotal work took place before they were born. And yet Koppelman has everlasting Stony Brook University ties; he continues to serve as executive director of the Center for Regional Policy Studies at Stony Brook, a post he has held since 1988, and occupies a seventh-floor office that overlooks the campus. At 92, he still teaches courses in the MAPP (Master of Arts in Public Policy) program in the College of Arts and Sciences.

Koppelman has an affinity for high places and aerial vistas, having been situated on the 12th floor in the H. Lee Dennison Building while he managed the Planning Department for Suffolk County.

On April 13, 2018, the Town of Brookhaven showed its appreciation by dedicating a 46-acre parcel of woodlands in Setauket to honor Suffolk County’s first planner.

As researchers, Gallagher and Smith would ferret all of this out on their own and eventually come face to face with the legend himself. “He was humble, kind and always willing to accommodate our schedules,” Gallagher said. The pair were particularly impressed with his vivid memory of dates, names, and minutiae, which not only made their job easier but made for a compelling and detailed documentary.

“One of the more well-known topics we learned about was the 208 Study, which included the fight for water quality that Long Island was waging back in the ‘60s and ‘70s and how they were already starting to study the effects that pesticides have on the environment,” said Anna. We discovered that studies such as these and the policies they gave rise to actually made Suffolk County one of the most progressive counties in the United States.”

“Trying to boil down decades of his work into about 30 minutes was quite the challenge. Dr. Koppelman was a planner with a vision for Suffolk County and protected farmland and open space, helping to preserve the quality of our waters, both surface and coastal, all while ensuring that the public understood his proposals and projects,” Gallagher said.

Future screenings of the film will be posted on the SoMAS website.