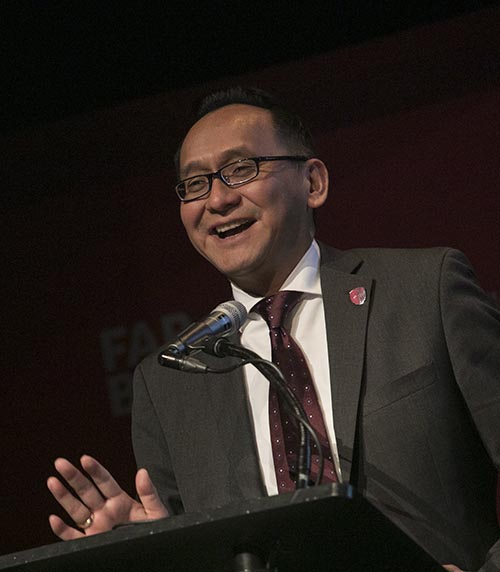 From new approaches to student recruitment to workshops on equity and gender awareness, Stony Brook is tackling the issue of diversity head-on. At the most recent in a series of town hall meetings, University officials offered an update on implementation of the Plan for Equity, Inclusion and Diversity.

“We’re interested in improving the diversity of the Stony Brook community through enhanced recruitment and retention and to expand educational research, healthcare and other efforts to ensure Stony Brook students have the ability to thrive,” President Samuel L. Stanley Jr. said in his introduction to the November 7 event.

The forum was hosted by President Stanley and officiated by Chief Diversity Officer LeManuel “Lee” Bitsóí. The event was the first of three town hall meetings on the topic scheduled this fall; subsequent meetings will take place on the East and Southampton campuses.

In the undergraduate colleges, Germana said, the goal is threefold: to increase student awareness on issues surrounding diversity, to raise faculty awareness and training, and foster partnerships that open multicultural dialogues.

Germana highlighted new workshops dealing with issues of diversity, inclusion, gender-awareness and equity that were taught to more than 4,500 new students during opening weekend. She also highlighted the Responding to Equity, Diversity and Inclusion (REDI) project, a six-hour training for staff and faculty to understand the diverse cultures that make up the Stony Brook community.

Lewis discussed various initiatives that promote diversity, including Pre-Medical Access to the Clinical Experience (PACE), which is intended to give pre-med students from all backgrounds opportunities for shadowing and clinical experience.

Representatives from Admissions and Human Resources discussed efforts to recruit with greater diversity in mind, including holding job fairs across Long Island to foster a wider range of applicants, implementing transportation that would make the Stony Brook campus more accessible for students from differing areas, and discussing how to engage students more effectively.

Bisiani described ways that Disability Support Services is seeking to communicate more effectively with disabled students in need of support. She also discussed efforts to improve the environment for test-taking, as well as a new hire of a social worker to assist students.

After the panel completed their updates, the floor was opened to questions submitted online and from the audience.

Professor Barbara Selvin in the School of Journalism spoke of her concerns regarding family leave and unequal pressures put on women at the university to deal with the issue.

Michael Bernstein, Provost and Senior Vice President for Academic Affairs, responded that “we don’t have a disagreement here, we need to improve the policies regarding parental leave and other dependent leave.”

Health Sciences student Natalia Eugene wondered when she might see more faculty that “look like me” within her own program, citing the importance of students seeing successful role models from the same background.

“It’s part of the central core of what we’re trying to do as part of the diversity plan,” said President Stanley, who spoke of the University’s continued efforts to have a diverse application pool for new faculty as part of its mission.

The Artists as Innovators — Celebrating Three Decades of New York State Council on the Arts/New York Foundation for the Arts Fellowships — exhibition will be on display at Staller Center’s Paul W. Zuccaire Gallery...

The CDC, as well as Stony Brook University and Stony Brook Medicine, are closely monitoring an outbreak of a 2019 novel coronavirus (2019-nCoV) in China. 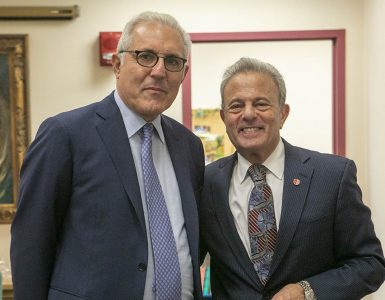 The Center for Italian Studies recently hosted a group of students/staff from Pietro Giannone High School in Benevento, Italy, for an opportunity to exchange experiences with Stony Brook University students, staff and...

Beyond the Expected Podcast, Episode 16: The Coronavirus Effect: Class of 2020 Response