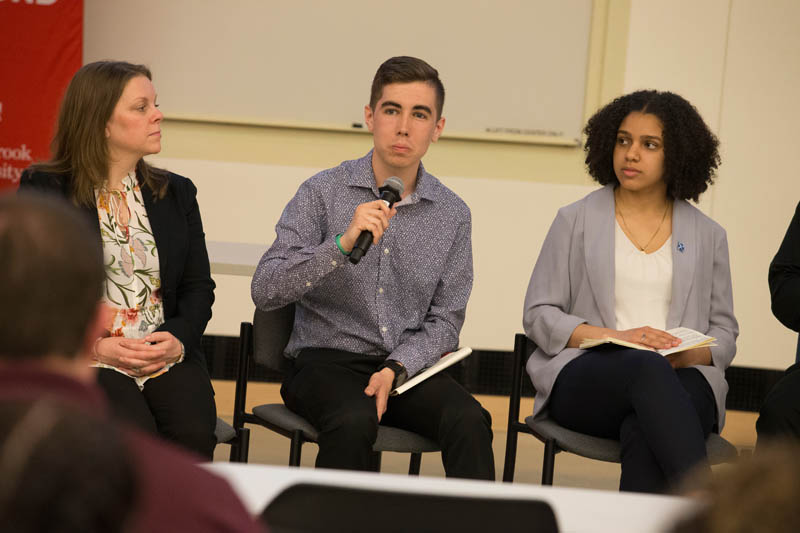 Attendees of the West Campus Town Hall Meeting held in Frey Hall on April 25 were briefed by Chief Diversity Officer Lee Bitsóí on the implementation of Stony Brook University’s Plan for Equity, Inclusion and Diversity.

Bitsóí called attention to the emergent themes of transparency, progress and change, student voices and action that were outlined in town meetings held in the Fall of 2017. He saluted students for their help in creating “social transformation” and thanked the Faculty Student Association (FSA) and Heritage Months committees for making cross-cultural events on campus more visible. He then highlighted the components of the Diversity website, which includes a link to the campus Diversity Plan, a progress update on the 2017/2018 implementation plan and a link for comments and questions.

Student panelists then introduced themselves and gave a snapshot of their roles on campus.

Diversity Director for the Undergraduate Student Government (USG) Ian Lesnick pointed out that the diversity committee hosts “Diversity Dialogues” on a bi-weekly basis and invited students to participate so they can address any concerns or issues they may have.

Elijah Duff, a student athlete who majors in history, plays football and has aspirations to be a special education teacher, said he is trying to involve his teammates by encouraging them to transcend their experiences on the gridiron and become more involved with their own cultural heritage.

Tahiana Abad, who serves as a USG senator, and an RA in the Arts and Sciences Center, invited her classmates to have “those uncomfortable conversations to make positive change.”

Bitsóí unveiled two new diversity-related training events — a collaborative effort with FSA to provide a cultural competency workshop incorporating R.E.D.I concepts in the Starbucks training day on May 29 for our franchise locations — and another effort to enhance and strengthen ways of interacting with students, Employee Training Day.

“Our students have guided us in the development of these programs that will serve to strengthen our community,” said Bitsóí.

Faculty and staff panelists then shared their personal perspectives and philosophies about promoting diversity throughout the university community.

Political science Professor Chuck Taber, dean of the Graduate School and vice provost for Graduate and Professional Education, said that growing up in Africa is the reason he became a social scientist and wanted to champion diversity.

Shelley Germana, assistant dean and director of the Undergraduate Colleges, stressed listening, learning and reflecting followed by actions that promote equity and inclusion.

Cheryl Chambers, associate dean and director of Multicultural Affairs, said she has devoted more than 20 years

at Stony Brook toward promoting diversity and urged attendees to transcend race and ethnicity. “There are secondary and tertiary things we don’t see or know about an individual until we hear them tell their story,” she said.

Jenn Rossler, senior manager of Recruitment and Employment Services, invited everyone to “come to the table with an open mind” and “make sure we are active in supporting communities that are not represented.”

Interim Vice President for Student Affairs and Dean of Students Rick Gatteau added, “Let me say what diversity is not. It is not a checklist or a conversation. It is living it every day.”

It was the students’ turn next.

“As the only Latina in USG, I feel it is my responsibility to bring awareness about the concerns of all of the minority students on campus,” said Abad.

Duff delivered a stirring account of how he enrolled at Stony Brook with the limited vision of making football his life. He also acknowledged that student athletes tend to get “wrapped up in our bubble and we don’t pursue other groups, organizations or people outside of our own circle.” Duff further noted that he had his eyes opened as the result of a series of encounters and events he experienced since he arrived. This allowed him to get involved in a variety of campus activities and to take a leadership role in helping others open up to new experiences.

Questions and comments from the audience and online followed.

An online question noted that the group “Concerned Women from the Colleges of Arts and Sciences,” had met with President Samuel L. Stanley, Jr. and asked what progress had been made on reinstating mandatory sexual harassment trainings and amending the reporting system so that victims don’t have to meet face to face for peer mediation with the accused. Chief Deputy to the President Judith Greiman outlined the aforementioned October 9 day of training and noted that it is in addition to other increased training and will be mandatory for all faculty and staff. Greiman also assured the questioner that it has never been Stony Brook policy to require peer mediation in Title IX cases or to insist that parties be in the same room during hearings. She also mentioned that SBU policy does not now and has never required complainants to go through the chain of command to lodge a Title IX complaint. Everyone may file their grievances directly with the Office of Institutional Diversity and Equality.

Other topics raised were problems regarding handicapped parking, the lack of bilingual recruiters for Latino families seeking help at college fairs and on campus tours, and concerns about the impact of budget cuts on women in humanities majors.