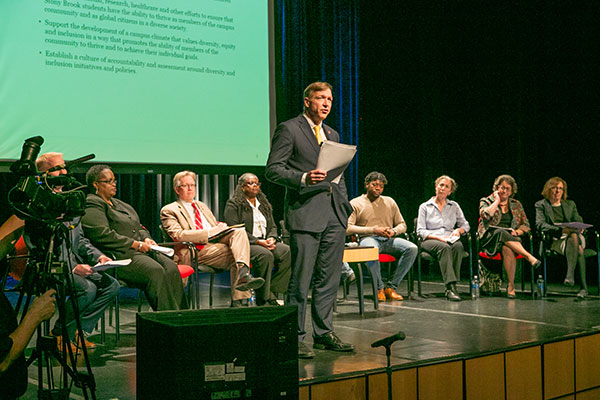 Along with University administrators and other community members, President Stanley outlined progress toward implementing the plan, which arises out of a University-wide effort to enhance the campus community and in consideration of the persistent issues of inequality in our society. Moderators also responded to questions and heard feedback from an overflow audience.

The event also featured statements from students Dwayne Moore and Sydney Gaglio, members of the Diversity Plan Advisory Council, as well as Robbye Kinkade, director of the R.E.D.I. Project (Responding to Equity, Diversity and Inclusion)

Moore noted that the plan was “about inclusiveness. You don’t feel different, you feel you have support” from classmates, faculty and the university at large. Gaglio said that “there are a lot of student voices” on campus and all should be heard as the plan is implemented. Both stressed the importance of student involvement.

Kinkade described R.E.D.I., a program for faculty and staff aimed at broadening the definition of diversity, raising awareness of implicit bias and providing an experiential activity that brings diversity issues on campus into sharp focus. The University conducted five R.E.D.I. seminars in November and will hold eight more in December.

In response to audience questions, President Stanley outlined steps toward enhancing recruitment and retention and professional development opportunities for African-American faculty and staff. He also reiterated his support for DACA, the federal  Deferred Action for Childhood Arrivals program, and the DREAM Act, proposed legislation offering support and a path to citizenship for undocumented immigrants. 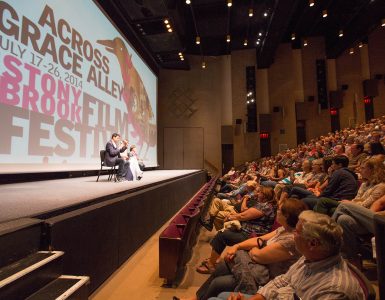 This May, the Stony Brook Film Festival will offer a series of award-winning short films from past festivals. The shorts will be available for free online and will be released on Tuesdays and Fridays every week through...

Lauren Brookmeyer, Director of Government Relations at Stony Brook University, has been elected 2020 President of The Science Coalition (TSC), a non-partisan organization dedicated to sustaining federal investment in...

Long Island Schools Visit SBU for an Hour of Coding

On Friday, December 6, 2019, 50 local students and their chaperones came to campus to learn about coding, careers in computer science, and college life. The students ranged from fifth to eighth grade and were from J...

Beyond the Expected Podcast, Episode 16: The Coronavirus Effect: Class of 2020 Response