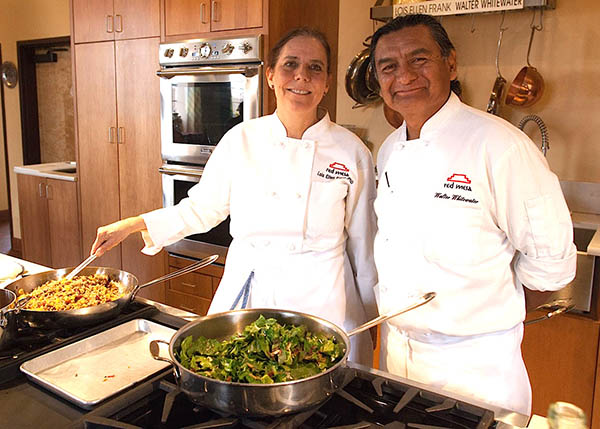 Stony Brook celebrates Native American Heritage Month throughout November with a variety of events and performances, but acknowledgement of the history and issues surrounding indigenous peoples is a year-round commitment on campus.

Perhaps most prominent of the Native American influencers at Stony Brook are Jay Levenson, an interlibrary loan clerk in the Access Services Department at University Libraries, and Timothy Long, a professor, conductor and pianist with the Department of Music. They remain key figures in promoting and furthering a fuller understanding of Native American culture, art and history on campus.

It was Levenson who, with the help of a Presidential Mini-Grant for Departmental Diversity Initiatives, created and organized the first Native American Heritage Awareness Program in 2016. That program featured traditional hoop dancer Ty Defoe and drew an overflow crowd to a “Dreamcatcher” social hosted by the Native American Students Organization (NASO), which is advised by Levenson.

Levenson, originally from upstate New York, is of Mohawk and Eastern European descent and earned a Bachelor of Arts with a concentration in Native American Studies from Empire State College. He recently organized a display of Native American artifacts and artwork in the Melville Library as part of the Native American Heritage Awareness program.

Dressed as a Mohawk scout, Levenson has participated in the 250th anniversary of the Battle of Lake George and other French and Indian War and American Revolution re-enactments.  For Stony Brook University, he has also made an appearance during a summer Native American Studies course taught by Madeline Cherney, adjunct professor for the Anthropology Department.

Long, who is of Muscogee Creek and Choctaw descent, is music director of the Stony Brook Opera and a well-traveled, in-demand performer and conductor. His talent has taken him from Carnegie Hall and the Kennedy Center to the Oregon Bach Festival, and on tour in London, Munich, Madrid, as well as an appearance on NBC’s Today Show. Since 2008 he has been a conductor and arranger for The Coast Orchestra, an ensemble composed of Native American musicians from across the United States.

Long’s most recent musical travels took him to Vancouver, British Columbia, where he was working on a new opera that deals with the topic of missing indigenous women in British Columbia.

“There are 566 tribes with very different cultures in the United States. We are as diverse as any other group. And yet I’m the only Native American conductor I know of,” said Long.

A third campus leader of Native American descent is Lee Bitsóí, Ed.D., Stony Brook’s first chief diversity officer. With his arrival comes the promise that the celebration of indigenous peoples will become a growing feature of Stony Brook life. Bitsói is a proud member of the Navajo nation and fluent speaker of his native tongue who brings with him an impressive leadership record in academic and student affairs. In the past twenty years, Bitsóí has served in various diversity roles at Harvard, Dartmouth, Georgetown and, most recently, Rush University Medical Center in Chicago.  He is also an accomplished scholar and writer who contributes to various diversity publications and websites covering Native American issues and topics.

This fall, Stony Brook also welcomed Professor Paul Kelton, a leading scholar of indigenous North American and colonial American history, thanks to a grant by the Robert David Lion Gardiner Foundation, whose mission is to promote the study, preservation and celebration of Long Island history.

Kelton is the author of Epidemics and Enslavement: Biological Catastrophe in the Native Southeast, 1492–1715 and Cherokee Medicine, Colonial Germs: An Indigenous Nation’s Fight against Smallpox, 1518–1824 and co-editor of Beyond Germs: Native Depopulation in North America. He is teaching “Indigenous Peoples of Long Island and New England,” an in-depth study of the history of the first peoples to inhabit southern New England and Long Island from prehistory to present.

“The struggle of indigenous peoples for survival in a shattered world and their continuing quest for political and cultural sovereignty is the major theme of the class,” said Kelton, whose heritage is Cherokee. Kelton came to Stony Brook from the University of Kansas.  The class also delves deeply into the importance of culture and language.

Reviving languages
For more than a decade, Stony Brook’s Department of Linguistics has been working with the  indigenous peoples of Long Island to revive languages they have not spoken in many generations.

“During the 1990s and again in 2009, members of the three Native nations of eastern Long Island — Unkechaug, Shinnecock and Montaukett — approached our Linguistics Department for help in revitalizing their Algonquian languages,” said Department of Linguistics Professor Robert Hoberman.

Hoberman and his colleagues Professor José Elias-Ulloa and Mohegan linguist Stephanie Fielding have established the Algonquian Language initiative (ALI), a joint project to reclaim these extinct tongues, using old word lists such as the one that Thomas Jefferson wrote while interviewing members of the local tribes during a visit to the area in 1791.

Dean Sacha Kopp of the College of Arts and Sciences has provided support for a doctoral student in Linguistics, Howard Treadwell-Smith, a member of the Unkechaug Nation, and funded two semesters of language classes (Spring and Fall 2017) taught by Fielding with Tina Tarrant, a Shinnecock citizen, Chief Harry Wallace, an Unkechaug citizen, and Conor Quin, a linguist from Maine. Wallace enjoys an appointment as a visiting scholar in Stony Brook’s Department of Linguistics, which houses a library of books and documents on American Indian languages and culture focusing mostly on the Long Island nations.

“The goal of this effort is that it will lead to the recruitment and graduation of more Native American students,” said Bitsóí.

“The University has done a solid job in achieving both consistency and numbers of Native American students over the years, but as with all things, we can improve our recruitment and outreach to tribal nations on Long Island,” said Bitsóí.

Stony Brook already has a significant Native American student component upon which to build. According to Braden Hosch, assistant vice president, Office of Institutional Research, Planning and Effectiveness, 254 students identify as either American Indian or Alaskan Native (185 undergrad, 69 graduate). In addition, 43 of these students (27 undergraduate, 16 graduate) reported that this was their sole ethnicity.

Why then is NASO struggling to maintain a charter on campus?

During her four years at Stony Brook, Skye Wiegman ‘17, who co-founded NASO with encouragement from the Office of Dean of Students, kept it afloat with help from a core of relatives from her Shinnecock family and students from other Long Island tribal affiliations.

She even got a boost from President Samuel L. Stanley Jr. “He sent out a campus-wide email talking about our committee, initiatives and listing upcoming events last November,” Wiegman said. “That was huge.”

But the membership peaked at roughly a dozen. “We need to hear from students who self-identify as Native Americans,” said Wiegman.

Wiegman and Levenson are quick to point out that to be a member of NASO you do not have to be Native American, just have interest in sharing and spreading the knowledge of Native American culture and issues — issues that might be clouding the identity of indigenous peoples.

“I’m not a mascot”
“People like to see us in a certain light. We’re not all weeping at the sight of trash,” said Long in reference to the famous 1971 ad campaign depicting a Native American shedding a tear over littering.  Such misrepresentations perpetuate stereotypes including the continuing usage of Native Americans as mascots, Long said.

“I’m not a mascot,” said Bitsóí. While referring to the Washington D.C.-based football team, he added, “It’s offensive when logos become caricatures because that perpetuates stereotypes. But the teams have gone to court [to retain the mascot names and logos] and the courts keep deciding in favor of the teams.  This is not honoring us, it is dehumanizing us.”

To that point, Levenson elaborated on the negative power that words can carry, such as affiliating Native Americans with potentially negative symbols such as Tomahawk Missiles and Apache Helicopters.  Bitsóí also stated that these associations with weapons and military operations is not an honor.  He points to the usage of the name “Geronimo” in the operation to hunt and kill Osama Bin Laden: “To equate Geronimo, an Apache military genius, who was fighting for the sovereignty of his people, with a global terrorist is not only disrespectful, it is ignorant and shameful,” he said adding that this type of misinformation of the Native American experience can be traced back to its loss of culture and language.

“There is a certain level of trauma in our DNA,” said Bitsóí. “We suffered intergenerational trauma about our loss of identity, such as being punished for speaking our languages. This underscores the importance of the ALI. When Long Island native peoples are vibrant speakers of indigenous languages that will allow everyone to better understand how they lived off the land utilizing organic concepts.”

Concentrating on uniquely Native American contributions, such as food, is one solution posed by Levenson. “For example, most people think of Italy when they think of tomatoes, but they are really Native American in origin,” he said.

Accordingly, it is apropos that Native American Heritage Month will close with an open house educational seminar, food sampling and book signing in the Student Activities Center Ballroom A on November 29 from 1:00 to 2:30 pm. The Faculty Student Association will be bringing Santa Fe, New Mexico, chef, author and Native foods historian Lois Ellen Frank, a member of the Kiowan nation, and Walter Whitewater, a Navajo chef who teaches with Frank at the Sante Fe School of Cooking, to feature Native American recipes and leave students, faculty and staff with a tasty reminder of what Long Island’s original settlers bring to the culinary table.

Stony Brook University President Maurie McInnis delivered a message to the campus community today about free speech and civility. The message reads as follows: One of the great joys of being part of a university...