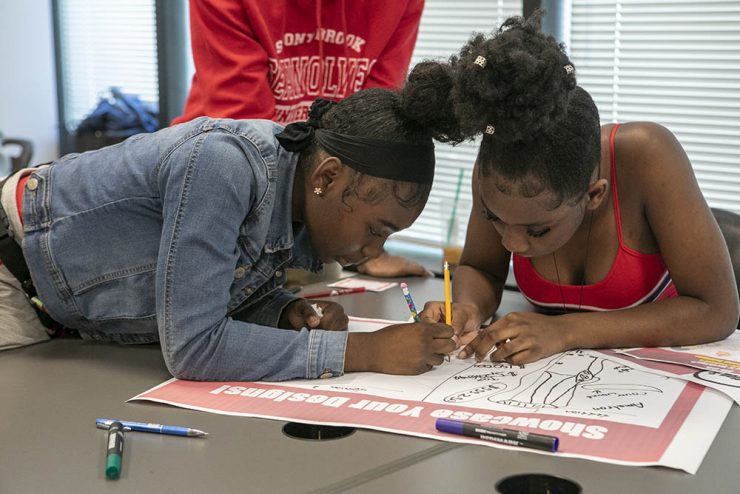 Charles Robbins, Vice Provost for Undergraduate Education and Dean of Undergraduate Colleges at Stony Brook, led the initiative with help from several co-directors through the program’s span, including his wife, Roni, a retired Coram Elementary School principal.

Robbins acknowledged that Stony Brook President Samuel L. Stanley Jr., who visited with the scholars each summer, was one of the biggest supporters of the program.

“I was sure I would be all right with seeing the program come to its natural conclusion,” Robbins said before the ceremony. “But now that I’m here with all of the scholars assembled again I am not so sure.”

The day’s events in the Charles B. Wang Center began with interactive, collaborative learning.

The current president Sishir Pasumarthy ’20 and past president Timothy Jack Tan ’19, of the Stony Brook Chapter of Alpha Eta Mu Beta (AEMB), with help from nine student and faculty volunteers recruited from the Department of Biomedical Engineering (BME), organized and led activities dubbed “Genes in the Bottle” and “Maker Day.”

During the “Genes in the Bottle” component, AEMB volunteers guided the students through an interactive experiment to extract and visualize DNA from their own cheek cells with supplies provided by the Science Ambassador Program of Bio-Rad Laboratories, a Life Science research product company.

In the “Maker Day” segment that followed, volunteers led the students through a four-step BME design workshop to introduce the importance of the iterative nature of an engineering process. Students had to identify a problem, define key design criteria, formulate a solution and then test and revise the design repeatedly until it could be finalized.

“Overall, I think the students had fun with the activities,” said AEMB Past President Tan ’19. “After seeing their DNA, as I described to them as ‘nature’s equivalent of your social security number,’ and gone through the thinking process that scientists and engineers use to solve real-world problems, they now have a better perspective of what biomedical engineering is. Not every student of the Freedom School may end up becoming an engineer, but at least they now have a taste for what it is like. Hopefully a spark will be ignited in at least one of the students to pursue science.”

Mei Lin Chan, faculty adviser for AEMB said, “I have collaborated with Community Relations on numerous outreach events in the past, so when she invited me to help again I was thrilled to contribute to this wonderful summer enrichment program.”

A number of the Freedom School influencers addressed the students during the half-hour ceremony that followed in the Wang Chapel.

Judith Greiman, Senior Vice President for Government and Community Relations/Chief Deputy to the President, kicked off the remarks by asking the students to keep, “Stony Brook in your hearts and heads.”

Korla Roberts, youth leadership and advocacy manager from the NYS CDF Office, reminisced about an earlier Freedom School event, saying, “I remember an epic dance battle among all the boys at 7:30 in the morning. It was phenomenal. The energy was so beautiful.”

Robbins told the class, “This has been a highlight of my career, which has been a long career. I loved seeing you grow from second grade to the young adults you are today, learning who you are and who you want to be. As Korla said, ‘Just remember the Freedom School way of life, the cooperation, and the ways to change the things that you don’t like.’”

Before the students enjoyed a farewell communal meal, Associate Provost for Enrollment and Retention Management Rodney Morrison gathered them all on the east lawn outside of the Wang Center for a final class exercise that emphasized communication, leadership and teamwork. The students had to devise a way to pass a ball around showing incremental improvements in time. The graduates met their goal and learned a methodology that could help them succeed in academia and life – a final lesson learned in the Freedom School. 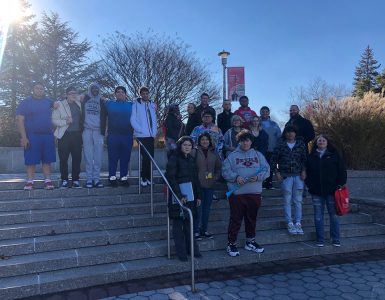 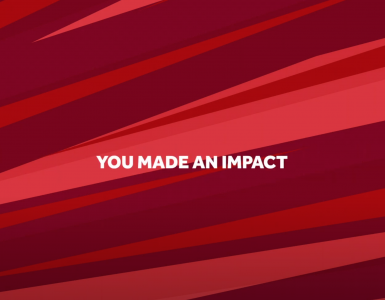 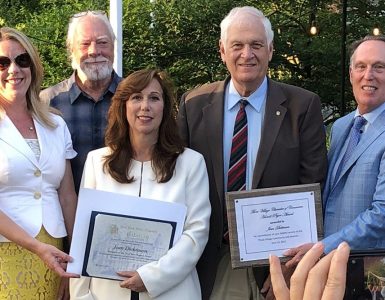