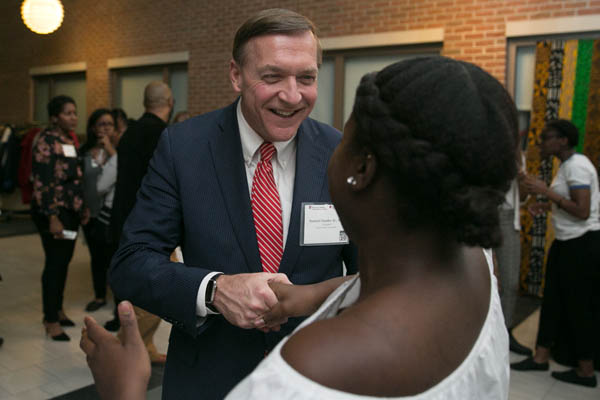 The Department of Africana Studies in the College of Arts and Sciences recently celebrated its 50th anniversary as a program and 20th anniversary as a department, marking these milestones at a recent celebration attended by students, faculty, alumni and friends.

“Countless students have benefitted from the many lectures, programs and activities you have sponsored and coordinated throughout the years,” said President Stanley.  “Most importantly, Africana Studies has supported our students not only academically but culturally and socially, forging graduates ready to succeed and inspire within a complex, connected world.”

“It was wonderful to have so many alumni as well as emeritus and former faculty back on campus to celebrate our anniversary,” says Dr. Tracey Walters, current chair of the Department of Africana Studies. “A lot has changed in 50 years, and it was great to reflect on our past and the great accomplishments we’ve made, as well as share our goals for the department’s future.”

One of the oldest degree-granting Africana Studies programs in the nation, the program started at Stony Brook in 1968. Not only is the department celebrated for the wide range of classes that it offers, it is also noted for the support it has provided for students of African descent, whether or not these students major or minor in Africana Studies.

“The students that we serve aren’t always majors or minors in the program,” says Walters. “Many students find themselves at home here, even if they are not program majors, and remain intimately connected to us. They become friends of the department.”

The department has made several great strides since its founding, one of the most notable being the hiring of poet, writer, teacher, and political activist Amiri Baraka, who for decades was one of the most prominent voices in the world of American literature. Joining the department in 1985, Baraka served as professor emeritus of Africana Studies for 20 years.

The department also played a pivotal role in the development and implementation of the University’s Plan for Equity, Inclusion, and Diversity. In addition, it has forged ties with other departments such as history, sociology, and English, and offers tracks in Health and Medicine and Human Rights and Social Justice.

Through its many initiatives and active role in campus life, the department has helped to bolster inclusivity and diversity at Stony Brook in a tangible, personal way.  Over the past three years, the department has been reaching out to high school students, teaching them about college preparedness and providing guidance for youth from at-risk neighborhoods.

Last year, in its continued effort to create socially responsible citizens who can think critically and make a positive impact on their environment, the department held an essay competition for local high school students. Spearheaded by Assistant Professor Dawn Harris and Visiting Assistant Professor Mark Chambers, the essay competition, “Civil Rights in the United States of America: What Do Civil Rights Mean to you in the 21st Century?” welcomed entries from high school students in grades 9 – 12 from participating schools in Suffolk County. The essay competition asked students to blend personal reflection and research in their critical assessment of the state of civil rights in the 21st century.

Since the program’s inception, more than 25,000 students have taken classes to learn more about the histories, sociology, philosophy, literatures, politics, anthropology, religions and experiences of people of African heritage.