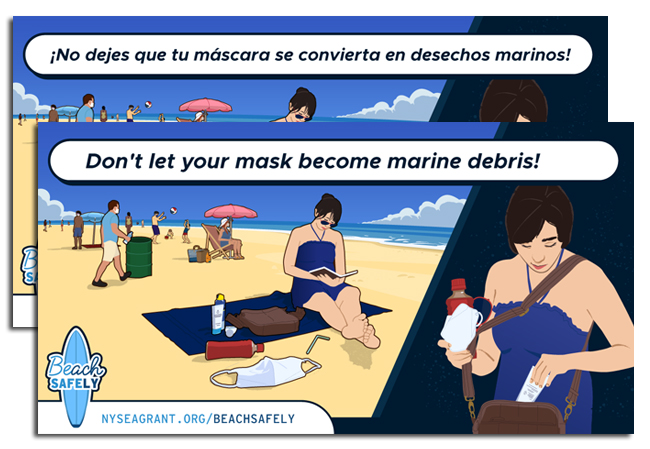 In Summer 2020, at the height of the pandemic, as well as the middle of beach season, New York Sea Grant and the New Jersey Sea Grant Consortium (NYSG and NJSGC, respectively) developed and implemented a nine-week social media campaign called “#BEachSAFEly.” The campaign was supported by a COVID-19 Rapid Response grant from National Oceanic and Atmospheric Administration (NOAA)’s National Sea Grant College Program.

The nine bilingual (available in English and Spanish) illustrated messages, created by freelance designer Joel Davenport, not only focused on standard “ocean hazards” tips such as “Break the Grip of the Rip,” but also incorporated general safety and health concerns related to COVID-19.

“While many social gatherings were discouraged last summer due to the COVID-19 pandemic, outside public spaces remained open and operating at a reduced capacity,” said Kathleen Fallon, NYSG’s Coastal Processes and Hazards Specialist. “Beaches became even more relevant as a place to which people could escape.”

“We are honored that FMC recognized #BEachSAFEly for both its design and effectiveness of conveying valuable health and safety information in an eye-catching way,” said Paul C. Focazio, NYSG’s Communications Manager. “The weekly series stood apart from other COVID-19 coastal messaging seen on Facebook, Twitter, and Instagram because it brought in different aspects of water safety, such as wave and rip current awareness.”

Moving forward and building off of the success of this all-virtual campaign, in Summer 2021, NYSG and NJSGC will continue the extension of these messages by making the images available, individually as postcards and combined in a poster, to local beach venues and other community organizations.

#BEachSAFEly marks the third time in eight years that FMC has bestowed the honor to Sea Grant in this social media category — in 2020, it was in recognition of the “Currents Clips” limited video series and in 2014 it was for a collection of science-based information released before, during, and after Superstorm Sandy.

As we approach the holiday season, just a few well wishes and reminders from the Stronger Together Team, in case you missed them: Holiday wishes and support from the Offices of the President, Provost and HSC Message...