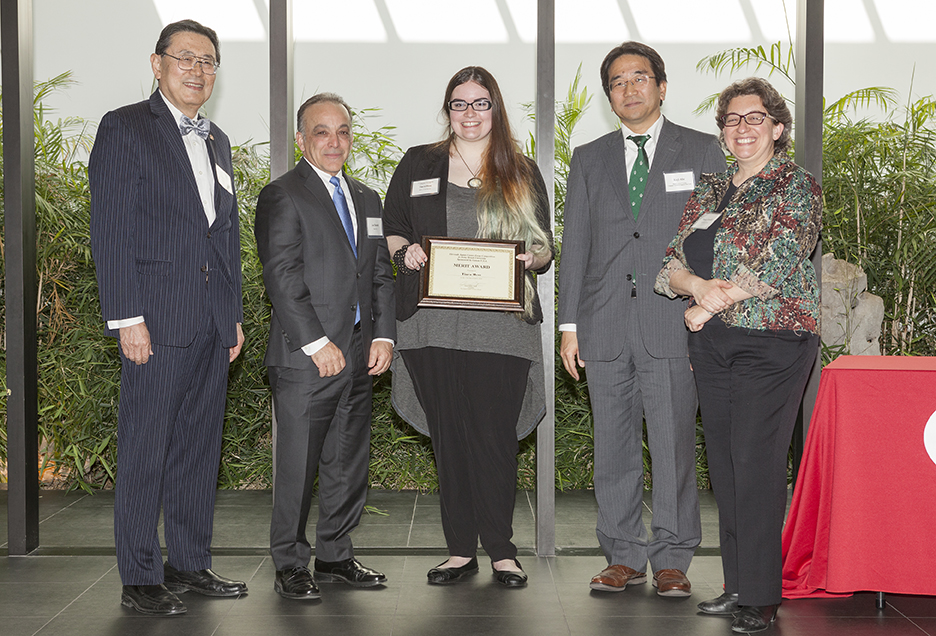 Tiara Hess, a Stony Brook senior majoring in history and anthropology, received a Merit Award in the college division of the Japan Center’s 11th Annual Essay Competition cosponsored by Canon USA. She was presented with an award certificate and a check for $200 at the Award Ceremony held on April 17, 2016, at the Charles B. Wang Center.

In her award-winning essay entitled, “Japanese Hospitality: How Kindness Led to a Significant Personal Change,” Hess chronicles the series of experiences in her life that helped her formulate a respect for Japanese hospitality and rebuke any stereotype that portrays Japanese social behavior as being infused with rigidity rather than cordiality. She implies that Americans tend to lean toward a preconceived notion that Japanese people are not friendly. Hess then dismisses this premise by stating that during her first visit to Japan in 2010, she experienced “culture shock” because the people she met treated her with such kindness, respect and politeness that she was overwhelmed.

When she returned to Japan in the summer of 2014, she participanted in the Mishima Homestay Program, and was grateful that her homestay mother treated her with hospitality and humanity, as if she was a member of her family. Hess truly believes that the bond she made with her Japanese host family will remain for the rest of her life.

Hess hopes to become a professor in Japan. She was recently accepted into the brand new Contemporary Asian and Asian American Studies Master’s Program at Stony Brook University. She will revisit Japan this summer for preliminary research on her proposed master’s thesis topic focusing on gender and sexuality in Japan.

The goal of the Japan Center’s Essay Competition is to promote awareness and understanding of Japan in the United States and to help young Americans broaden their international horizons. This year the contestants were required to write about one or more aspects of Japan including art, culture, tradition and values, and make a connection to their experiences and/or future goals. The contestants did not need to have any experience in visiting Japan or studying Japanese.

A total of 268 essays were submitted this year. These essays were carefully evaluated in two stages by a panel of judges made up of Stony Brook faculty members. The first Place Best Essay Award in the College Division was presented to Mizuho Yoshimune of Yale University. Her winning essay was entitled, “Kuuki O Yomu”: The Complexity of Keigo.

To view the winning essays and more information on the competition, as well as other Japan Center programs, visit the JCSB site at http://www.stonybrook.edu/japancenter.