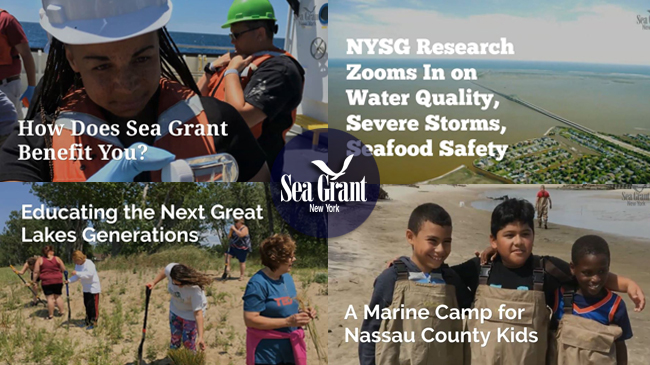 In a virtual ceremony held on September 22, New York Sea Grant’s (NYSG) “Currents Clips” received a Folio Award from the Fair Media Council (FMC) for “Best Social Media Public Awareness Campaign.” NYSG — a cooperative program of Cornell University and the State University of New York — has offices based at Stony Brook University and is one of 34 university-based programs under the National Oceanic and Atmospheric Administration’s National Sea Grant College Program.

Launched in mid-2019 as a limited series, “Currents Clips” is a collection of one- to two-minute videos that immerses NYSG website visitors, social media followers and NY Coastlines e-newsletter subscribers into the program’s coastal research, extension and education work.

Running in two waves that began in late May 2019, a total of 40 clips were released through late fall via @nyseagrant on Facebook and Twitter as well as at nyseagrant.org/currentsclips.

As highlighted in the video below, NYSG funded research that supported the work of Stony Brook University’s School of Marine and Atmospheric Sciences.

Each of these words-on-the-screen videos, produced by NYSG Communications Manager Paul Focazio and freelance writer Ryan Strother in collaboration with the program’s staff, features a similar instrumental backing track, as they are designed to be viewed with or without sound in social media news feeds.

“There are a lot of stories being covered by New York’s media, especially on Long Island and throughout New York City,” said Focazio. “So this series was our experiment to act as ‘disruptors’ in this ever-increasingly saturated market, with our end product making science more accessible and digestible to a wide-ranging audience on social media.”

The idea worked, furthering NYSG’s mission of “Bringing Science to Shore” by serving New York aquatic science videos to more than 20,000 Facebook users, and an average of 1,600 viewers per day on Twitter. “I’m proud to report that we achieved our goal, which was to provide eye-catching summaries of our scientifically-driven, detailed stories in a concise and visually compelling way,” said Focazio.

“The Folio judging process is unlike any other, as it seeks to recognize outstanding social media campaigns of relevance and importance to the public,” said FMC CEO and Executive Director Jaci Clement. “That’s a high standard, and on behalf of the Fair Media Council’s Board of Directors, we congratulate you on raising the bar even higher.”

The Folio Awards brings together the best in media with community and business leaders to celebrate and honor quality news and impactful social media. Local, regional and national news stories and social media campaigns are judged by media-savvy news consumers and journalists for excellent journalism and relevance to the public, among other criteria. Each year, a mix of business and community leaders and journalists volunteer their time as judges to support the Fair Media Council and its Folio Awards.