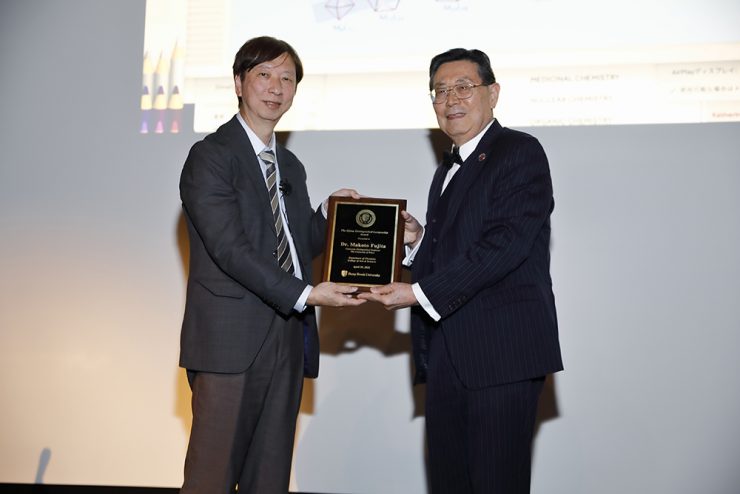 On April 29, the Department of Chemistry, Institute of Chemical Biology and Drug Discovery (ICB&DD), College of Arts and Sciences and Office of the Provost hosted the Inaugural Ojima Distinguished Lectureship Award in Chemistry, honoring inaugural award recipient, Professor Makoto Fujita, University Distinguished Professor of the University of Tokyo. The event took place at the Charles B. Wang Center Theater.

Established in 2020 to commemorate Department of Chemistry Distinguished Professor Iwao Ojima’s 75th birthday, the award is based on an endowment from the Ojima family to help ensure that eminent scholars can continue to enrich the Department of Chemistry and Stony Brook University. Fujita introduced the epoch-making scientific concept of “metal-directed self-assembly” to supramolecular chemistry, creating building blocks from transition metal groups and organic molecules that self-assemble into large, stable cyclic and three-dimensional structures.

Peter Tonge, distinguished professor and chair of the Department of Chemistry, offered opening remarks at the event, thanking Ojima and his wife Yoko Ojima for their generosity as well as outstanding work with philanthropy and for the establishment of the Ojima Distinguished Lectureship Award in Chemistry. Nicole Sampson, dean of the College of Arts and Sciences and distinguished professor of chemistry, then highlighted Ojima’s longstanding contributions to science and dedication to research in academia. Sampson also expressed her gratitude to Ojima for his mentorship from her initial days as a young faculty member in the Department of Chemistry, stating she has kept his words of wisdom in science in mind throughout her career.

Fujita’s lecture, “Coordination Self-Assembly: From Origins to the Latest Advances,” explored the compelling field of molecular self-assembly and will highlight Fujita’s current research, including molecular confinement effects in coordination cages, solution chemistry in crystalline porous complexes and giant self-assemblies. It included correlation of 3-dimensional structure of the assemblies to fundamental mathematical theories, as well as practical applications of the work in the determination of 3-D structures of organic molecules by the truly innovative “crystalline sponge method,” and in the stabilization of large proteins inside the assembled cages.

The lecture was followed by the presentation of the award plaque by Ojima to Fujita.

Fujita has been recognized with numerous awards for his research, including the prestigious Wolf Prize in Chemistry in 2018. The award was shared with Omar Yaghi, University of California, Berkeley, for conceiving metal-directed assembly principles leading to large highly porous complexes. Fujita and Yaghi pioneered and nurtured the fascinating new field of chemical sciences, which is flourishing and ever growing.

Ojima received his BS, MS and PhD degrees from the University of Tokyo, Japan. He was a senior research fellow at the Sagami Institute of Chemical Research until 1983, at which time he joined Stony Brook University’s Department of Chemistry as an associate professor. In 1984, he was appointed professor, then leading professor in 1991 and distinguished professor in 1995. Ojima was the department chair from 1997 to 2003, and has been serving as the founding director for the Institute of Chemical Biology and Drug Discovery since 2003, and as president of the Stony Brook University chapter of the National Academy of Inventors since 2016.

chemistry College of Arts and Sciences

Eszter Boros, assistant professor in the College of Arts and Sciences Department of Chemistry, spoke about her journey to Stony Brook University and her research in a Q&A with the National Institutes of Health blog...

Led by Professor Amy Marschilok, the findings suggest that adsorptivity of mask materials is an important feature in providing protection from viruses such as SARS-CoV-2.