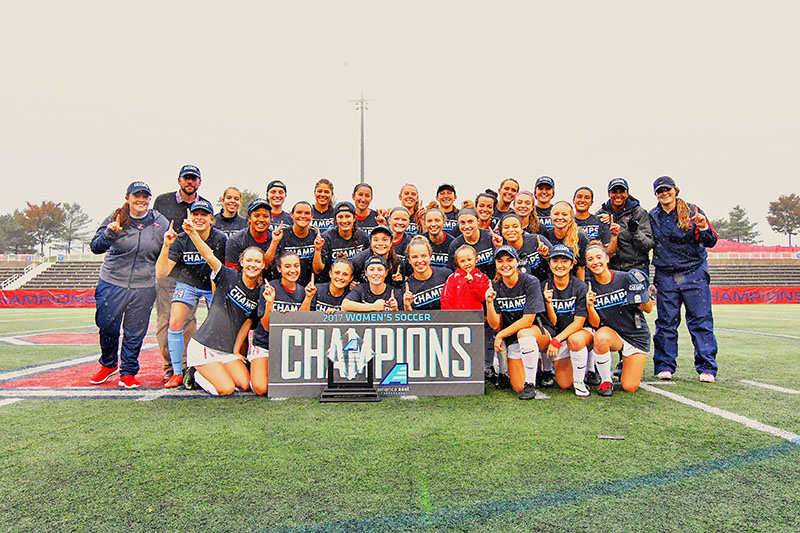 When the Stony Brook University women’s soccer season came to a close on November 10 in the first round of the NCAA playoffs against tenth-ranked Penn State, with a 7-0 loss, it felt more like a beginning than an end.

It marked just the second time that the Seawolves women’s soccer team advanced that far — they last achieved that milestone in 2012.

This time they did it with a 2-1 win over Vermont in the America East Finals. All season long the Seawolves were energized by second-year head coach Brendan Faherty, who helped propel the Washington Huskies to NCAA tournament appearances the two seasons before he arrived at Stony Brook.

Although Stony Brook will lose the services of six seniors, three of whom were cited for America East honors, the impression they made on the younger players will be felt for some time to come. Seniors such as forward Manuela Corcho, who scored the eventual game winner against Vermont, defender Sydney Vaughn, named Championship Most Outstanding Player and defender Franki Priore, will all be sorely missed as the Seawolves aim to build on this watershed year.

“Coming in as a freshman I felt so welcomed by everyone, especially the seniors,” said Alyssa Francese, a business management major from Yorktown Heights, New York. The 5’4” forward scored one of the two goals against Vermont.  She was named three-time America East Rookie of the Week honoree for her flurry of eight goals scored over an eight- game span capped by two scores in a conference victory over UMBC on October 15.

Another newcomer-turned-sensation was Sophia Manner, a freshman goalkeeper from Helsinki, Finland. Manner not only earned a starting position on the team but was chosen as America East Rookie of the Year.

She hit a wall in the middle of the season after a hot start and credited her coaches, family and friends back home and the senior Seawolves for helping to restore her self-confidence. “The seniors helped us to be our best on and off the field and not be afraid to make mistakes,” Manner said.

“We had no captain,” said Faherty. “All six of our seniors were great leaders.”

In fact, when the team started a woeful 2-6, Faherty met with his senior corps to get a sense if they felt they could turn the team around.

“We then won the next two, lost one and won three in a row,” he said.

The team was literally on the same page for most of the season.

“We read a book as a team, ‘Legacy, 15 Lessons in Leadership,’ by James Kerr,” said Faherty. “Each chapter carries a different lesson and each Thursday or Saturday we would meet and discuss the last chapter we read. It seemed as if the chapter mirrored what was happening on the field.”

Faherty prides himself on making certain that athletes take the student-athlete title seriously. “Our GPA is always above 3.0 and this past spring we averaged 3.32,” he said. “The reality is that only one percent of all collegiate student-athletes will make a living playing soccer. Our priorities are to be the best students, best soccer players and best in the community we can be. Student-athletes may find themselves struggling in one of those three categories but if they are struggling in more than one we have a problem.”

Faherty said he also believes in cultivating the culture of diversity on the roster. “You find out more about yourself and life when you mesh different cultures,” he said. This team carries players from Hawaii, Finland, Sweden, Germany, Vancouver British Columbia, Oregon, Missouri as well as upstate New York and Long Island.

“It will be tough to replace our seniors,” said Flahery. “But I’m excited for the group that is returning. We’ll be adding some pieces. It’s hard to remain consistent winners in soccer in the Northeast. We’re building a foundation for the future.”

Freshman forward Fanny Gotesson, a business major from Skillingaryd, Sweden, agreed. The team goal of course is to win the America East championship, not only this year but in the years to come. I cannot see anything standing in the way of us achieving this goal.”