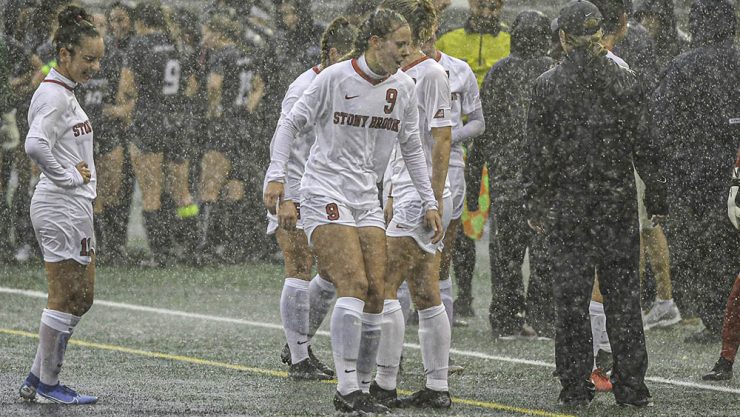 Stony Brook women’s soccer braved the elements and a rain delay of more than two hours to clinch a home game in the 2019 America East Women’s Soccer Tournament, defeating the visiting New Hampshire Wildcats 2-0 at LaValle Stadium on Sunday afternoon.

The regular season finale is set for Halloween night in West Hartford, Conn. The Seawolves and Hawks will kick off at 6 pm with a win or draw clinching Stony Brook’s second consecutive America East regular season title.

They will return home either November 3 for the quarterfinals or November 7 for the semifinals of the 2019 America East Women’s Soccer Championship.

“It was obviously very difficult circumstances with the heavy rain and over two-hour delay after 21 minutes. It’s tough to stay focused but that’s one of the strengths of our team,” said Head Coach Tobias Bischoff. “They are staying focused and can handle difficult circumstances, which is not easy, but they did a terrific job.”

Junior Alyssa Francese scored her 12th goal of the season, which is the most by any Seawolves player since 2000. She now has seven game winners on the year, ranking her second nationally.

Stony Brook finishes the regular season 7-2 at home. The Seawolves have won six of their last seven games, outscoring opposition 19-3.