What to Look For as Seawolves Clash with Wildcats 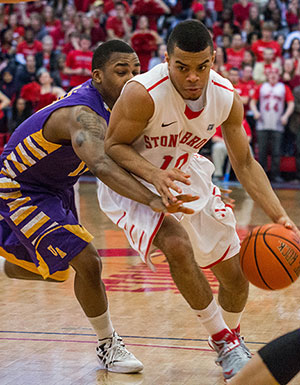 Here’s food for thought as the Stony Brook Seawolves take on the Kentucky Wildcats in our first NCAA appearance. (Tune in Thursday, March 17 at 9:40 pm ET on CBS; join a watch party.)

While the new-to-the-Dance Seawolves are laden with seniors, Kentucky is relatively youthful (their core consists of a sophomore and three freshmen). That’s potentially a plus for Stony Brook. The veteran squad feels a sense of urgency because this crop of talent is graduating and wants to cap their careers in a blaze of glory.

Kentucky is the most successful NCAA Division I program in history with 2,204 wins, and they lead in a slew of other categories as well. Nearly always present in the brackets, the Wildcats have won seven national championships.

By contrast, the Seawolves are making their maiden appearance in the Big Dance. Coach Steve Pikiell has turned the program into a winner in a relatively short time since taking over in 2005. Stony Brook is looking to combine intensity with the looseness of having little to lose — they’ve already taken the program farther than ever before by claiming the America East title. Fans hope the Seawolves can escape from relative obscurity and become the belle of the NCAA ball.

Kentucky’s standout is Jamal Murray, a 6’5 freshman guard who averaged more than 22 points per game with an effective field goal percentage of 59. He’s an offensive monster with a reputation for defensive shortcomings.

Stony Brook’s Jameel Warney is a model of consistency; he’s managed to score 2,000 career points without ever firing one three-point shot. He was a one-man wrecking crew against Vermont, scoring a career-high 43 points. But Jameel excels on both ends of the court: named America East’s best defensive player for three successive years, he wreaked havoc grabbing rebounds against the Catamounts.

Jamal may present problems for Stony Brook defense on the perimeter, where he’s a high-percentage three-point shooter. Expect 6-foot senior Carson Puriefoy, a 15.1 per game scoring threat for Stony Brook, to counter outside the arc, where the Wildcats could stand some defensive improvement.

Warney is an inside threat at 6’8, but the Wildcats counter with some rain-makers in 6’10 Marcus Lee, 6’11 Skal Labissire and seven-footer Isaac Humphries. Only Vermont’s Ethan O’Day had a loftier view than Warney at 6’9.

Could 13 Be Our Lucky Number?

The Seawolves are fresh from a come-from-behind 80-74 victory over the Catamounts and are now hoping to declaw the Kentucky Wildcats. To paraphrase one blogger, how can you beat a wolf that swims?

A computer system employing the same technology as the fastest and most power-efficient supercomputer in the world has been installed by SBU's Institute for Advanced Computational Science.