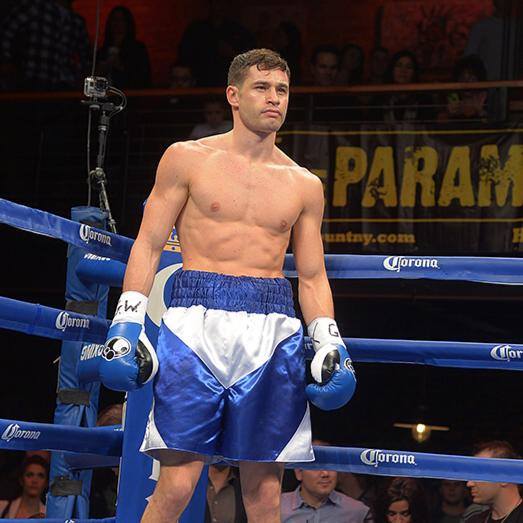 After finishing his kickboxing career with a record of 20-0, Chris Algieri (BS Health Sciences, ’07) moved on to boxing, amassing another undefeated record of 20-0, most recently beating Russian fighter Ruslan Provodnikov for the title of World Boxing Organization (WBO) Jr. Welterweight Champion in June.

On September 27, the Huntington, Long Island native, Stony Brook alum is coming home as a special guest of the Stony Book Alumni Association and Stony Brook Athletics where he will be recognized during the 6 pm football game as the “Alumni Fan of the Game.” Algieri, who is slated to fight current WBO Welterweight Champion Manny Pacquiao on November 22 in China, will take a training break to join Stony Brook University’s annual homecoming celebration Wolfstock this Saturday.

The boxer is billed as a brains-over-brawn fighter, and he’s got the credentials to back it up. Algieri earned his bachelor’s in Healthcare Science at Stony Brook, then went on to earn a master’s from the New York Institute of Technology. In the kickboxing ring, Algieri’s known as the undisputed world champion in two weight divisions and two different organizations.

At home in Huntington, he’s recognized a hero. At Stony Brook, Algieri is one of our esteemed alumni.

Attend Wolfstock this Saturday to enjoy Long Island’s Biggest Backyard BBQ, a homecoming football bout between your Seawolves and the William & Mary Tribe, and your chance to meet the champ Chris Algieri.