“Voice of the Seawolves” Carries On a Family Tradition 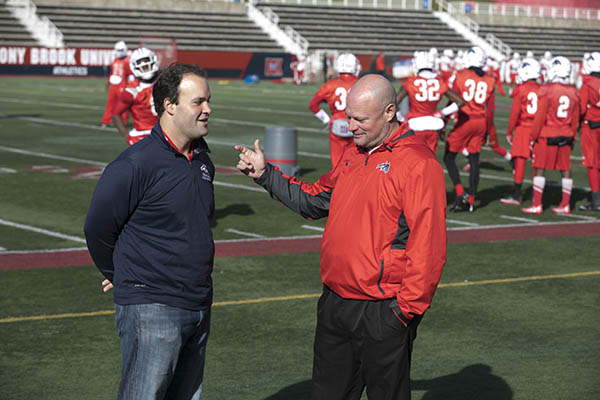 In business as in comedy, timing is everything. Stony Brook Athletics broadcaster Josh Caray, the grandson of legendary Chicago Cubs announcer and Baseball Hall of Famer Harry Caray and son of longtime Atlanta Braves broadcaster Skip Caray, learned this firsthand.

At first glance it would seem that someone so well-connected within the industry would have no problems finding work. But Caray insists on being hired on his own merits, and so he rarely lists his famous forebears when submitting his résumé.

“For the most part, people don’t care,” says Josh. “Especially if I apply for football or basketball jobs. I came from a family of baseball men.”

Back in 2011, Caray was a producer and studio host for Tulane University football and basketball with IGM Sports, where he talked to Brian Miller, the head director for Basketball Communications at Tulane University on a regular basis. Although both men moved on, they followed each other through social media and in 2015, when Brian became the Stony Brook Assistant Athletics Director for Communications at Stony Brook, Josh reached out to congratulate him.

Caray was unhappy with his job at the time and when Miller told him that there was a radio announcer opening for him at Stony Brook, he leapt at the opportunity and was hired.

“Thank God that we stayed in touch,” said Caray. “This is a contact-driven industry. We had only actually spoken to each through headphones and had never met.”

After he left IGM Sports, Caray was working at a television station in Atlanta, Georgia, and his career prospects started to look dim.

“The station was turning from news to a talk format and I knew my role there would become limited if I was not laid off,” he said.

But the experience taught Caray a valuable lesson: Never panic. “Even though the situation in Atlanta was starting to deteriorate, in retrospect if I had stuck it out for six months, the job at Stony Brook would have come through. But instead of being patient I panicked and took a terrible job and paid for it.”

Since arriving at Stony Brook in March 2015, Josh has called roughly 30 football games and more than 85 men’s basketball contests.

His highlight to date was calling the play-by-play during the epic comeback the men’s basketball team staged against conference rival University of Vermont that guaranteed the Seawolves their first-ever trip to the NCAA “March Madness” championship tournament in 2016.

“It was such a great moment,” Josh said. “The stuff you dream of as a kid.”

He thinks that Stony Brook is on the verge of “something special” in both football and men’s hoops. Asked to pick a favorite sport to cover, Josh doesn’t hesitate. “There are things about [covering] each sport that I love and hate,” he said. “But I’ve grown more attached to basketball. If I can think of anything I don’t like about it I’ll get back to you.”

Josh’s earliest memories of his famous grandfather are when he was roughly five years old. “I was playing baseball by myself at my house in Atlanta with my Braves uniform on. He pulled up in his limo, got out of the car and threw the ball a little with me. I didn’t see him as a superstar then.”

But by the time Josh was nine and he would go to Wrigley Field to see his grandfather call the Cubs’ games, he knew exactly who Harry Caray was. “My dad shielded me from that early on but I became fully invested in sports,” he said.

Something else his father was trying to spare him from was the “broken home” he grew up in. “My grandfather got divorced at a time when you didn’t get divorced.” Said Josh.

But his father was a typical dad who picked him up from school. When the young Josh accompanied his dad to Turner Field, it was also impossible to hide what a fan favorite he was.

“Celebrity came with a price,” he said. “I saw some great stuff and some not so great stuff.”

Josh’s brother Chip is also a successful broadcaster who was also a Braves announcer, baseball host for Fox Sports and teamed up with his famous grandfather at Cubs’ games.

Josh’s decision to become a broadcaster was twofold: he grew up around two of the best role models a boy could ask for and he knew that his own athletic career would dead-end in college. And because he lacked the intimacy with the sports required to become a color analyst, Josh elected to do play-by-play.

At Stony Brook, Caray has teamed up separately with former NFL safety Eric Coleman and with Stony Brook alum Curt Hylton on WHLI 1370 AM to call football, and with Hylton in 2015-2016 covering men’s basketball games before flying solo on 94.3FM the Shark.

“I do the drawing and they fill it in,” Josh said of his color commentary partners, adding that in radio the play-by-play announcer is the star whereas in television it is the color analyst because he “tells you what you can’t see.”

So what does a man who descended from television and radio royalty think it takes to be a broadcaster? “A voice to a broadcaster is like speed to an athlete,” he said. “You can’t teach either one. I can’t sound like my granddad or my dad did. You have to possess a set of pipes with thunderbolts and adds knowledge of the sport and skill.”

Josh has become even more integral a part of the Stony Brook family because he teaches a one-credit sports reporting course during the spring semester with Bob Herzog from Newsday and Jamie Stuart of News 12.

“I can’t get a kid to be Vin Scully [legendary Los Angeles Dodgers broadcaster] in eight weeks but I can give them an appreciation for the job and how difficult it is,” Josh said. During the course of the semester, he has his students call a game from the stadium stands, do research on guest lecturers and watch videos and read articles about broadcasters, all for class discussion.

His advice for aspiring announcers is simple: “Be a well-rounded, multimedia journalist. As the industry changes everything is getting streamlined. Don’t just be an anchor, be a reporter, an editor and a producer as well.”