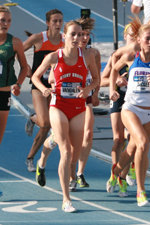 Lucy Van Dalen from the Stony Brook track and field team has been named America East Woman of the Year. The honor recognizes the conference’s senior female student-athlete who has best distinguished herself throughout her collegiate career in the areas of academic achievement, athletic excellence, service and leadership.

Van Dalen, a six-time All-American, was chosen by the America East’s Senior Woman Administrators from a pool of 12 women. To be nominated, student-athletes must have completed their eligibility in their primary sport by the end of the 2012 spring season, received their undergraduate degree prior to the conclusion of the 2012 summer term and had a minimum of a 2.5 GPA on a 4.0 scale.

A native of Wanganui, New Zealand, Van Dalen became Stony Brook’s first-ever national champion after winning the mile at the NCAA Indoor Track and Field Championships. Most recently, she took fourth in the 1,500 in her final collegiate race at the Outdoor Championships.