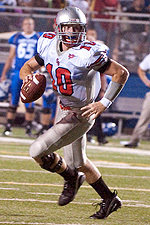 Thanks to a pair of first half interceptions, the Stony Brook football team hung with 15th-ranked Massachusetts in the first half and trailed by only seven at 24-17 at the half. But UMass came back in the second half with 20 unanswered points as it went on to take a 44-17 non-conference victory. Sophomore Michael Coulter threw for 126 yards and two scores for the Seawolves.

UMass connected on a 49-yard pass from Kyle Havens to Jeremy Horne on its first play after receiving the opening kickoff, and the long pass set up the first score of the game, a three-yard run by Chris Zardas that put the Minutemen up early, 7-0.

Stony Brook answered with an impressive drive of its own on its first possession, marching down the field in seven plays to tie the score. Senior Conte Cuttino ran for 20 yards and Coulter threw for 32 more on the drive, including a five-yard scoring toss to redshirt freshman Jordan Gush that tied things up at 7-7 at the 8:12 mark. Stony Brook’s defense then came up with its first big play of the night when junior Arin West picked off his second pass of the season on the third play of the next UMass drive, returning it six yards to the UMass 24. Redshirt freshman Wesley Skiffington turned the miscue into points, booting a career-long 43-yard field goal to give the Seawolves their first lead of the game, 10-7.

UMass came back with a pair of scoring drives, one at the end of the first and the second in the first six minutes of the second quarter, getting touchdowns on each to take a 21-10 lead. Late in the half the SB defense again came up with an interception, this time by freshman Kenny Tuiloma who took it back 27 yards to the UMass 15. The Seawolves wasted no time converting, as Coulter hit Gush on SB’s first play to pull the Seawolves back to within 21-17 with 2:33 left in the half. The Minutemen came back and scored the final points of the half, running a two-minute drill that was aided by a key penalty when Stony Brook was called for too many men on the field after it had halted UMass near midfield. UMass then went on to get a 30-yard field goal that made it 24-17 at the half.

After stopping SB on its first possession of the second half, UMass scored on its first possession when Jon Hernandez burst 36 yards up the middle to cap off a 76-yard drive that gave the Minutemen a 31-17 advantage with 10:01 left in the third. The UMass defense went on to hold SB to just 23 yards and no points in the quarter, and came up with an interception that was turned into a touchdown in the final minute. Added to an earlier field goal, UMass took a 41-17 lead into the final quarter.

Massachusetts’ lead was too much for Stony Brook to overcome in the final 15 minutes, which saw the Minutemen tack on a field goal for the final margin of victory. UMass had a balanced attack that produced 241 yards on the ground, 140 from Hernandez, and 259 through the air. Stony Brook totaled 229 yards of offense, 141 of which came via the pass. Freshman Eddie Mateo made his collegiate debut at running back and led the Seawolves with 56 yards on 11 carries.