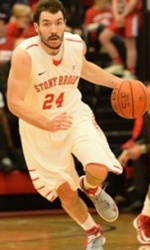 With Stony Brook at 15-5 and in first-place in the America East heading into tonight’s game against Albany, Brenton has his sights set on making the NCAA Tournament for the first time. Stony Brook has been close, reaching the conference title game in 2011 and 2012, but falling to Boston University and Vermont.

Brenton is the Seawolves’ all-time leader in assists and steals. He has also grabbed 1,000 rebounds in his career and is on pace to score 1,000 points.

Tonight’s game at 7 pm will be streamed online on ESPN3 and the WatchESPN app for mobile and tablet devices.