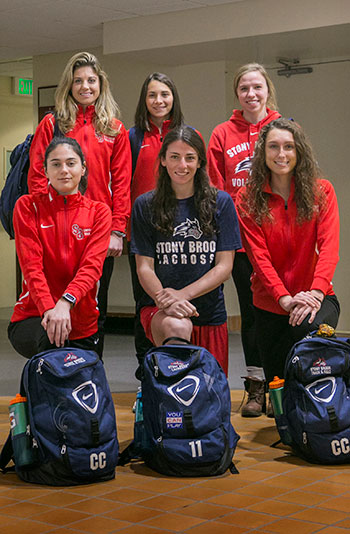 At Stony Brook, “scholar athlete” is more than just a collegiate catchphrase.

With more than half of the nearly 250 Seawolves — excluding club and intramural sports — posting a GPA of 3.0 or higher last fall, a feat accomplished consecutively since 2006-2007, Stony Brook is on track to record its highest student-athlete academic year GPA on record.

The highest overall GPA average belonged to the women’s volleyball team at 3.39, but five of the seven 4.0s were earned by cross-country/track and field participants.

Tennis led all other men’s sports academically, with an average GPA of 3.11.

“The most popular major among students in our 3.0 category is business management, followed by health science,” said Kimberly Wodiska, director of Student-Athlete Academic Success. “Business is also most popular among the 3.5 GPA group, but biology is by far the most common major for the 4.0 students.

“All of our student-athletes work extremely hard to reach their academic and athletic potentials,” said Wodiska. “They chose Stony Brook because of the academic opportunities it affords.”

One of the reasons for last semester’s results could be the University-wide emphasis on academic excellence, said Wodiska.

The Stony Brook University men’s basketball team is enjoying its greatest season ever with a berth in the NCAA Division I tournament, but its on-court success isn’t the only aspect of its game that has earned recognition.

“This basketball program is remarkable on and off the court,” President Stanley said, adding that the team has achieved a 1000 APR [Academic Progress Rate] for five of the past six years. “This has been and continues to be a truly inspired season.”

Stony Brook earned NCAA APR Public Recognition awards in 2012-13 and 2013-14 for finishing among the top 10 percent of all men’s basketball teams.

APR is a multi-year measurement of academic progress and retention, designed to track student-athletes who receive athletics financial aid. Each student-athlete receiving aid earns one point for staying in school and one point for being academically eligible. A team’s total points are divided by total possible points and then multiplied by 1,000 to yield the APR.

In June 2015, Director of Athletics Shawn Heilbron introduced the Together We Transform initiative, which aims to enhance the student-athlete experience.

As part of that initiative, the Department of Athletics added to its student-athlete academic success team, which now consists of seven staff members. A new department called The Stony Brook Life Skills Office aims to promote and support personal and professional growth and well being for each student athlete. Headed up by Courtney Rickard, the Office connects student-athletes to leadership opportunities, community service and campus resources while they are at Stony Brook and helps prepare them for post-graduation through career development programming and partnering with the Career Center.

All Stony Brook student-athletes are assigned an academic advisor, receive iPads, have access to a staff of more than 50 tutors, and can take advantage of the 6,000-square-foot Goldstein Family Student-Athlete Development Center, which features a quiet study room private tutor rooms and a 24-computer lab. Wodiska said an expansion of the Center is planned.

No one understands this more than volleyball standout Lo Hathaway, who battled illness and injury during her years at Stony Brook. In spite of that, Lo is Stony Brook’s career leader in digs, a testament to her ability to persevere under less than ideal conditions. She stresses that it is critical to academic success to develop a study strategy.

“I’m very visual, so I use tons of flashcards with all types of colors representing different chapters or materials,” Lo said. “It helps me compartmentalize and makes all the information seem less overwhelming.”

The sports themselves often provide an opportunity to reduce the pressure that can come with being a student-athlete.

Sometimes the field of study offers a built-in advantage.

“Being on a medical track helps me stay focused. It helps me to prioritize my time,” said Melian, who won the America East individual championship in cross country.

All student-athletes agree that it is important to plan and stay ahead of the course load.

For example, cross country/track and field competitor Megan Cooney said she keeps everything in a planner she buys prior to every semester, fellow runner Kathleen Pouder, who is on track to graduate with a master’s in medical humanities, compassionate care and bioethics, recommended never waiting until the last minute to complete an assignment or study for an exam.

Lacrosse player Samantha DiSalvo said a technique that works for her is to make sure she understands her notes from all of her classes at the end of each week so she can build upon the lessons.

And harrier Molly Persky employs some strategic time management by reading her notes for her classes while icing her legs after practice.

“It makes icing a little less boring and helps me get through my homework at the same time,” she said.

As if all of this isn’t enough of a motivation for students who thrive on competition, there is always the ultimate incentive — preparing for a career if their athletic days come to an end. Whatever their professional field, Stony Brook’s student-athletes are skilled in time management and multi-tasking — that is, if they can continue to apply the focus they used while trying to balance rigorous athletic and academic schedules at the same time.