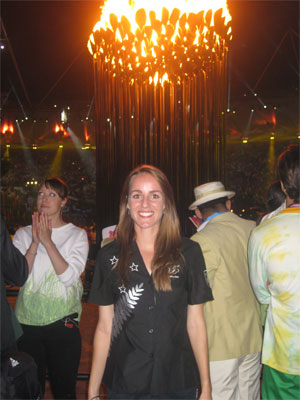 Former Stony Brook track & field standout Lucy Van Dalen ’12 has arrived in London, where she will compete in the  2012 Olympic Games. Van Dalen will run her signature event, the 1,500, for New Zealand.

Van Dalen’s  4:05.76 race earlier this year ranked her among the top 30 in the world. Her time was achieved in San Diego at the Summer Nights Track & Field Series on June 20.

“Lucy will be the first woman to represent New Zealand in the 1,500m in more than ten years, and we look forward to seeing her in Olympic Stadium in London,” said Kereyn Smith, New Zealand’s Olympic Committee Secretary General.

A six-time All-America and winner of the indoor mile at the 2012 NCAA Championships, Van Dalen will be only the fourth woman to represent New Zealand in the 1,500, joining Diane Zorn-Rodger and Anne Garrett-Audain (Montreal 1976) and Toni Hodgkinson (Sydney 2000).

Van Dalen is pictured at the Opening Ceremonies held in London last Friday.