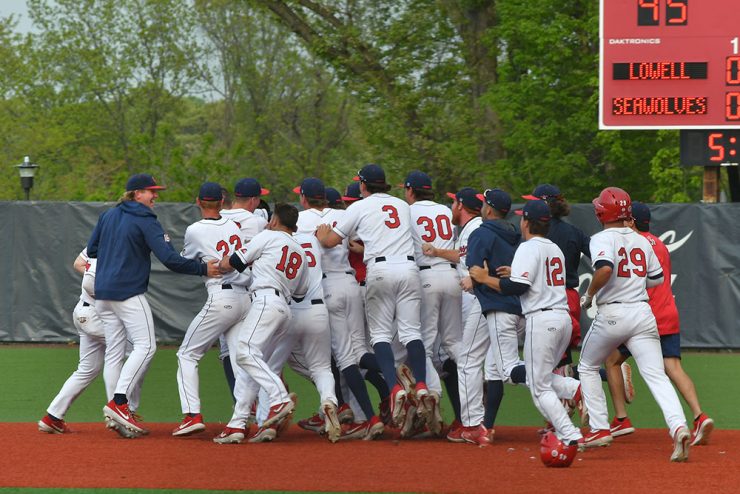 The Stony Brook University Baseball team earned a No. 1 seed in the 2019 America East Tournament by virtue of an 8-7 win in the second game of a doubleheader with No. 4 UMass Lowell on Saturday. This is the fifth time that Stony Brook has taken the America East title. Other years include 2011, 2012, 2014 and 2015.

Sophomore catcher John Tuccillo helped secure that victory with a sacrifice fly in the sixth inning at Joe Nathan Field.

That will set the Seawolves up to face off against the winner of UMass Lowell vs. No. 5 Maine on Thursday at 11 a.m. in Binghamton.

Stony Brook will most likely give the ball to its tournament opener five-game winner Greg Marino, who notched a team-high 13 starts this season.

The Seawolves won four of six matchups with Maine this season including a sweep at the end of March at home. In its only series with UMass Lowell, Stony Brook dropped two of three games this past weekend.

The Seawolves were leading all SUNY competitors for the Commissioner’s Cup Trophy coming out of the winter, an honor awarded to the most well-rounded athletic department in terms of success, with schools earning points based on their finish in the regular season and championships in the postseason. This title enhances their chances to claim the Commissioner’s Cup.