Six Inducted Into the Stony Brook Athletics Hall of Fame 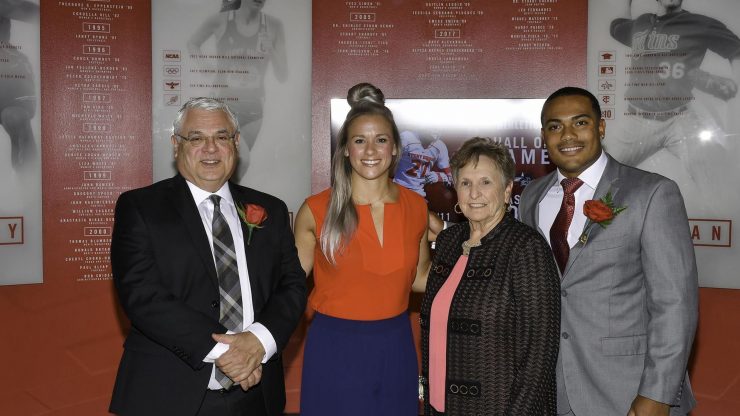 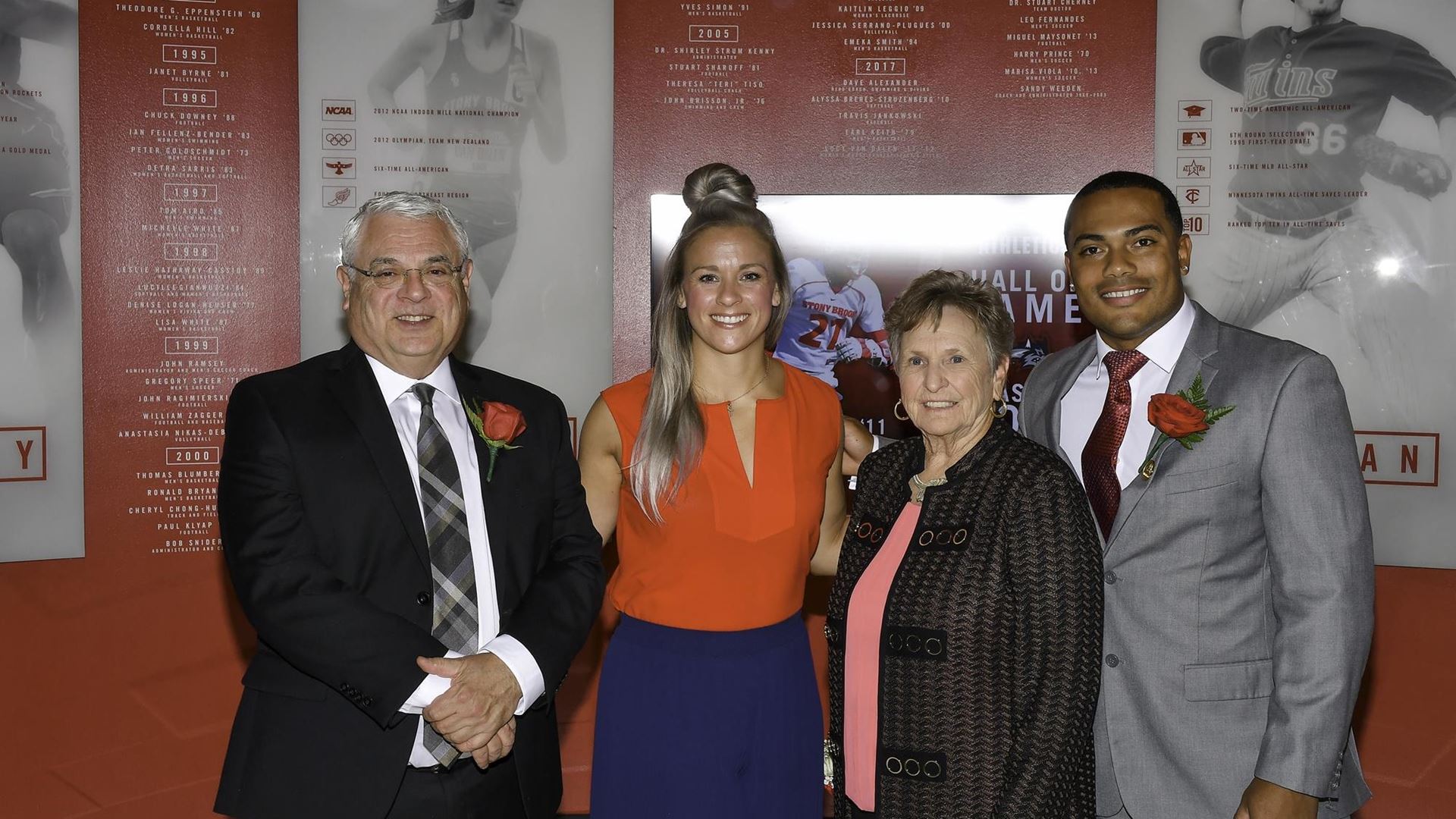 The Stony Brook Department of Athletics inducted six members into the Stony Brook Rita & Kurt Eppenstein Athletics Hall of Fame on Friday night with the addition of the Class of 2019. Friday’s ceremony, at the Island Federal Credit Arena, included six outstanding individuals who distinguished themselves during their time on campus.

“As we celebrate our 20 years at the Division I level, it is more important than ever to celebrate those individuals who helped to lay the foundation for the program that we are today,” Stony Brook Director of Athletics Shawn Heilbron said. “Our six inductees left legacies at Stony Brook that shaped our department in countless ways.”

Here is a closer look at the Stony Brook Athletics Hall of Fame Class of 2019:

LEO FERNANDES (Men’s Soccer)
Leonardo Fernandes made his mark on the Stony Brook men’s soccer program the moment he stepped foot on campus in 2009. As a freshman, he tied Stony Brook’s Division I record for goals by a rookie and by his junior season was the program’s all-time Division I leader in points scored. The three-time America East Midfielder of the Year received recognition from the NSCAA following his junior campaign, being named to the NSCAA All-Northeast Region First Team.

Fernandes’ illustrious soccer career continued on to the professional scene after being selected in the fourth round of the 2013 Major League Soccer Supplemental Draft. He went on to play with the Philadelphia Union of the MLS before taking the pitch for the New York Cosmos Soccer team where he received the North American Soccer League Young Player of the Year Award.

In 2017, Fernandes signed with his current team, the Tampa Bay Rowdies of the United Soccer League.

MIGUEL MAYSONET (Football)
One of the greatest running backs to ever step foot at LaValle Stadium, Miguel Maysonet helped elevate the Stony Brook football program to the national scene. Maysonet ran for over 1,000 yards in each of his three years as a Seawolf, helping the team reach its first two national playoff appearances in program history. The two-time Big South Offensive Player of the Year had a transcendent senior season, running for 1,964 yards which is the 11th most in FCS history while also becoming the conference’s all-time leader in touchdowns.

Following his stellar senior campaign, Maysonet garnered numerous All-America honors and recognition and was the runner-up for the prestigious Walter Payton Award, which is given annually to the most outstanding offensive player in the FCS.

Maysonet’s efforts did not go unnoticed as he was invited to the 2013 NFL combine and eventually signed with the Philadelphia Eagles. He went on to sign with seven other NFL franchises during his professional career.

HARRY PRINCE (Men’s Soccer)
Before graduating in three seasons, Prince provided a consistent defensive backstop for Stony Brook’s men’s soccer program. He led his team to 20 wins in 35 contests, allowing just 30 goals in his three seasons as the keeper for the Patriots. This included a 0.36 goals-against average in the 1967 season and a career average of 0.85.

He engineered a great turnaround in the program and was named a three-time Team MVP for his efforts. The team had 11 wins in the previous four seasons before he came to campus and the squad only lost 10 times while he manned the posts.

Post graduation, he created a construction company that specialized in building high-end homes until he passed away on the job in 2005.

MARISA VIOLA (Women’s Soccer)
After graduating with two degrees from Stony Brook, Viola currently holds the school record with 10 shutouts in the 2007 season, as well as compiling the lowest goals-against average (0.72) in school history. Eight of those 10 shutouts came in a scoreless streak that ran over 863 minutes, which is the seventh-longest streak in Women’s Division I history.

The America East All-Conference First Team selection and Goalkeeper of the Year in 2008 earned a spot on the United Soccer Coaches All-Northeast Region Second Team after leading the conference with an .858 save percentage. She also earned All-Region Second Team honors in the 2007 season after starting all 18 games in goal for the program.

SANDY WEEDEN (Coach and Administrator)
In over 33 years of executive athletic administration and coaching at Stony Brook, Weeden pioneered female collegiate athletics at Stony Brook University. Along with being the women’s athletic director for 20 years and the combined men’s and women’s athletic director for several years after, Weeden was the first coach in the women’s basketball program’s history.

A two-time coach of the year, she also was recognized by Stony Brook with the VIP Booster Club Service Award in 1982 and for Exceptional Service to Undergraduate Education in 1985.  Weeden is responsible for the start of five women’s teams at Stony Brook, engineering the school’s swimming, track & field, volleyball, soccer and lacrosse programs.

Dr. Cherney has dedicated his craft to support the well-being of athletes, concentrating on the prevention of sports-related injuries as well as presenting ways to make athletics facilities safer for all participants. Additionally, Dr. Cherney has been an advocate for the importance of automated external defibrillators on the sidelines of sporting events.

Submit Your Nomination for the Hall of Fame Class of 2020!