Seawolves to face Kentucky in NCAA Round One 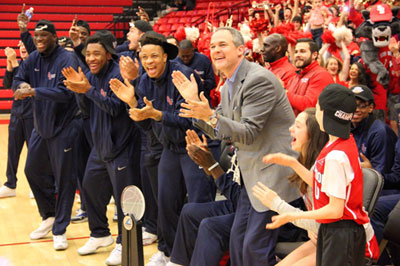 The dance card is filled out, and Stony Brook is looking forward to a date with the Kentucky Wildcats.

One day after winning the America East Tournament and nabbing their first NCAA tournament bid, the Seawolves and their fans exploded with enthusiasm as CBS announced 2016’s March Madness brackets.

Stony Brook, seeded 13th in the East Region, will face No. 4 seed Kentucky in a March 17 game in Des Moines, Iowa. The game is expected to air at 9:40 pm on CBS.

Cheered on by a passionate crowd of students, alumni, and local fans, the team watched in keen anticipation as the pairings were announced in a Sunday evening public event at Island Federal Credit Union Arena.

“Since I took over this program this has been something I’ve dreamed about. It’s a great day for us,” Coach Steve Pikiell said. “We are going to play a historic program – one of the best programs in college basketball – with a Hall of Fame coach and first round draft picks all over the place.”

The SEC champion Kentucky Wildcats are a formidable opponent, boasting a 26-8 record and leading the nation in offensive efficiency.

But the Seawolves, suddenly a Cinderella favorite, have the potential to shock better-known programs. Led by Jameel Warney, a dominant scorer and rebounder who notched 43 points in Saturday’s victory, the team is solid on defense and explosive at the rim.

According to USA Today sportswriter Scott Gleeson, “Stony Brook should be playing with the same hunger that got them to the Dance and also with a looseness that comes from being a natural underdog as a mid-major.”

“This is a great opportunity for our guys to go and continue their season and play one of the best teams in the country,” Pikiell said.

Historically, No. 13 seeds have beaten No. 4 seeds in more than 20% of NCAA matches.  And the Seawolves have the determination and skills to beat those one in five odds.

Their sights are lasered in on an upset and they’re ready to go deep. 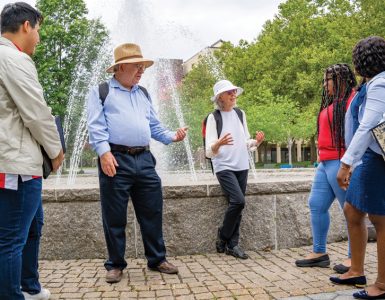 For more than 50 years, Stony Brook has provided New York’s high-potential but underserved students the opportunity to attend the state’s top public university through the Educational Opportunity Program/Advancement on...