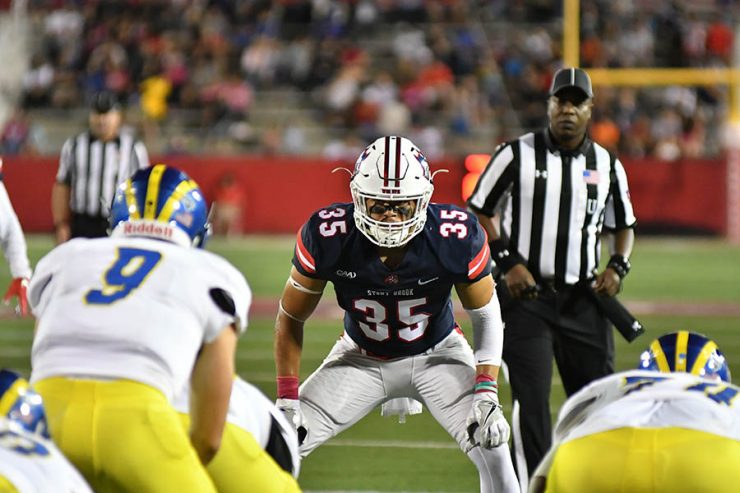 This isn’t your typical homecoming football game: When Stony Brook, ranked 17th, lines up against the Rhode Island Rams, ranked 22nd, on Saturday, the contest is being billed as a battle of the Top 25 teams.

If the excitement in the air seems more palpable, that’s because this season seems to have picked up from where last season left off, when the Seawolves finished 10-3. 2017 also saw the Seawolves earn a second-place finish in the tough CAA conference, an 11th overall ranking in the national polls, and a quarterfinal appearance in the NCAA Division 1 Football Championship Subdivision (FCS) playoffs.

This year, Stony Brook brings a 5-2 mark into the highly anticipated Homecoming game.

A big part of that record and ranking is the Seawolves’ dominant running game, courtesy of “The Long Island Express,” a duo made up of seniors Donald Liotine and Jordan Gowins. So far, that two-man train has rolled for more than 1,200 rushing yards and seven rushing touchdowns this season.

As for seniors, they account for 20 of the 22 offensive touchdowns this season. On the defensive side, the two leading tacklers — Noah McGinty and Shayne Lawless — are also upperclassmen. And even more important than racking up numbers, the Seawolves’ senior syndicate accounts for that all-important intangible of any athletic team, leadership, with 20 on the roster.

Another engine driving the team’s success is the defense. Stony Brook has scored a national best six defensive touchdowns and one special teams touchdown so far this fall.

The achievements take on additional meaning given the difficult schedule and strength of the CAA Football Conference. Saturday’s game will mark the third consecutive game against a nationally ranked opponent, with two more ranked foes waiting in the wings: 2017 national champion and 2018 national runner-up James Madison on October 27, and Delaware, another top 25 team, on November 10.

Stony Brook’s season got off to an ominous start when a tough Air Force Academy team blanked them 38-0 on September 1.

“They were a really good opponent. Give credit to them,” said Seawolves Head Coach Chuck Priore.

Showing the same grit that marked the 2017 season, the Seawolves didn’t stay down long, roaring back the following weeks to down Bryant, 50-21, and Fordham, 28-6. Senior captain Lawless earned CAA Defensive Player of the Week honors, helping hold Fordham to -7 rushing yards.

“You have to be able to score points a lot of different ways,” said Priore. “We did it on special teams, defense and offense.”

Continuing their streak, the Seawolves earned their first conference win the following week with a 36-10 win over the Richmond Spiders.

Next up was Villanova, a game that had Priore as excited as he was apprehensive. The Seawolves had knocked the Wildcats out of the first round of the FCS playoffs the last time the teams met on Long Island four years ago, when Villanova was ranked within the top 12 in the nation.

On September 29, that nervousness proved justified as the Wildcats put 21 unanswered points on the board before fumbling a second-quarter kickoff that was recovered by linebacker Elijah Duff. A solid running-back-by-committee effort led to three Seawolves touchdowns and then the defense stiffened up, opening the door for a late fourth-quarter Joe Carbone touchdown pass to Cal Daniels that put the game out of reach as Stony Brook held on for a 29-27 win.

A similar first-quarter deficit the next week proved too big a hole for the Seawolves to climb out of against the division-leading Towson Tigers, which had the highest-ranked offense in the conference at the time. Trailing 21-0, Stony Brook fought back until second-half turnovers broke the game open, as Towson prevailed 52-28.

After that bruising loss, conference foe University of New Hampshire provided the spark the Seawolves needed, and Stony Brook rolled to a 35-10 win. Quarterback Carbone struck early with touchdown passes to Andrew Trent and Marshall Ellick. Sparkling defense by Augie Contressa, T.J. Morrison and Lawless did the rest, setting the stage for this week’s showdown with Rhode Island.

As for how Saturday turns out for the Seawolves, running back Liotine said, “For us to come out with a victory, we need to start fast, play focused and keep the energy throughout the game.” He added, “Our offense needs to establish the line of scrimmage early, and make plays when there are plays to be made.”

Leaders who lust can and often do have an enduring impact. Professor Todd L. Pittinsky, Department of Technology and Society, explores six types of lust in his latest book, Leaders Who Lust: Power, Money, Sex, Success... 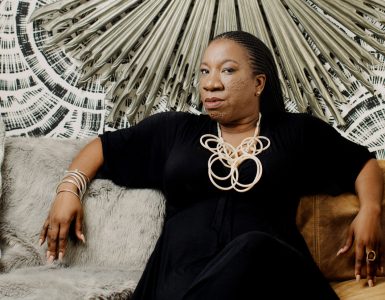 Tarana Burke — activist, advocate, founder of the ‘me too’ Movement and Time magazine’s 2017 Person of the Year — joined Stony Brook President Maurie McInnis for a virtual conversation on Wednesday, April...

With a nearly $3 million grant from the NIDA, Assistant Professor Scott J. Moeller, PhD, of the Renaissance School of Medicine is studying the brains of those with opioid use disorder.