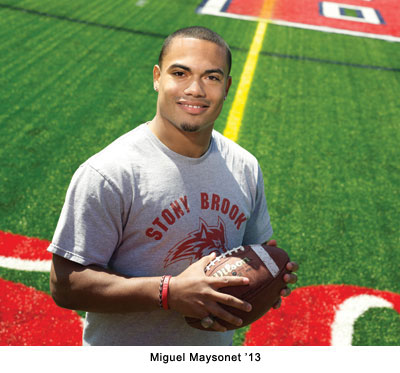 Stony Brook’s star running back, Miguel Maysonet ’13, has signed with the Philadelphia Eagles as a free agent after failing to be selected in the NFL draft, to the surprise of many analysts.

Maysonet finished the 2012 season with 1,964 yards and 23 touchdowns. He was runner-up for the Walter Payton Award, the FCS equivalent of the Heisman.

Some sportswriters had picked Maysonet to be be selected as high as the fifth round of Saturday’s NFL draft, but fewer teams than expected opted to draft running backs this year.

Senior Maysonet was a unanimous selection for Big South Offensive Player of the Year in 2012 after recording one of the best seasons by a rusher in recent history. He totaled an FCS-best 1,721 yards and 156.45 yards per game. With 21 touchdowns this season (19 rushing, 1 receiving 1 kick return), he joins former standout Brock Jackolski ’12 as the only players in Big South history with 20 touchdowns in a season.