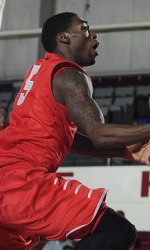 Goodman enters the weekend first in the conference and 23rd nationally in steals per game at 2.7. The athletic, versatile guard’s defensive prowess has the Seawolves at 43rd in the country in scoring defense (59.7), marking the third time in three years the squad has ranked in the nation’s top 50 in scoring defense under Head Coach Beth O’Boyle.