Men’s Basketball Loses to Albany, Competes in NIT Next 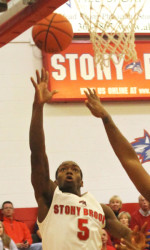 The Stony Brook men’s basketball team, which leads the nation in true road victories, fell to Albany, 61-59, in the semifinals of the America East Championship at Albany’s SEFCU Arena on March 10.

Freshman Carson Puriefoy had 16 points to lead the Seawolves, whose seven-game winning streak was snapped and fell to 24-7. Stony Brook struggled to make shots, shooting 33.3 percent from the field. The Seawolves were also outrebounded 38-32.

“I give a lot of credit to Albany; I thought this was one of the best games they played all season,” said Coach Steve Pikiell. “Unfortunately for us, Albany played two points better than us tonight. In my 21 years of coaching, I’ve never been around a better group of guys, the most unselfish team I’ve ever coached. I’m glad that they will get a chance to play another game. We are going to go to the NIT to compete and try to win games.”

Senior Tommy Brenton had a game-high 12 rebounds, pushing him over the 1,100 career-rebound mark. With 1,104, he is 11 rebounds shy of Northeastern’s Mark Halsel for third all-time in America East history.

As a result of winning the America East regular season championship, the Seawolves have earned an automatic bid into the National Invitation Tournament (NIT), the program’s third appearance in the last four seasons. Stony Brook will learn its opponent next Sunday, March 17, at 9 pm, live on ESPNU.