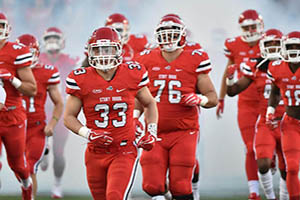 The Seawolves advanced to the second round of the 2017 NCAA Division I Football Championship by running an offensive clinic on visiting Lehigh, racking up more than 600 yards of total offense and six touchdowns in a 59-29 win Saturday in Kenneth P. LaValle Stadium.

“I’m really excited for the program and for Stony Brook University,” said Head Coach Chuck Priore.”To win a playoff game and to win it in the fashion that we won it in is exciting. This is a credit to how hard these guys work.”