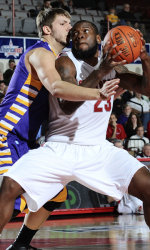 Senior Dallis Joyner tipped in an offensive rebound with four-tenths of a second remaining to break a 55-55 tie and send the Stony Brook men’s basketball team to a 57-55 win over Albany in the semifinals of the America East Championship on March 4. The offensive rebound by Joyner was one of a season-high 22 for the Seawolves, who turned those second chances into 20 points.

The win sends the top-seeded Seawolves (22-8) to the America East Championship final for the second consecutive season, and this year they will host the game against No. 2 seed Vermont on Saturday, March 10, at Stony Brook Arena at 11 am. The game will be nationally televised on ESPN2. Ticket information is available now.

“It was a great game and a great finish,” said Head Coach Steve Pikiell. “Albany played a great game, I expected nothing less. Our guys hung tough through the three-pointers and made winning basketball plays tonight. Dallis never gets any credit, but he had a fantastic game on both ends of the floor, and he’s been doing it all season.”