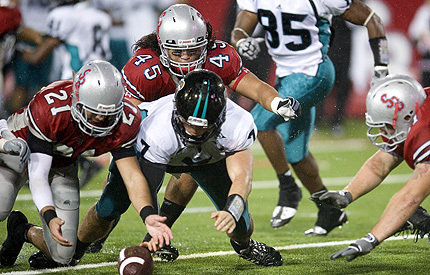 Stony Brook football outlasted Coastal Carolina, 16-10, on October 24 at LaValle Stadium. For the second-straight game, senior Conte Cuttino scored the game-winning touchdown for the Seawolves, taking a fourth quarter screen pass from sophomore Michael Coulter 28 yards for the score. With the victory, SB remains undefeated in Big South Conference play with a 3-0 record while evening its overall record at 4-4. Coastal Carolina now stands at 3-4 overall, 1-2 in the Big South.

Neither team managed to get much going offensively as the game opened up with three straight punts. Coastal Carolina seized the first good field position of the day when E.J. Brown intercepted a pass attempt from Coulter at the Coastal 44 yard line and returned it 26 yards to the Stony Brook 30. A penalty on the interception return backed the Chanticleers up to the 40, but their offense was able to advance to the Seawolves’ 29 before stalling and sending in the field goal unit. Kicking into the wind, Coastal’s Justin Durham pushed the kick slightly to the right as it bounced off the upright and fell into the end zone, leaving the game scoreless.

Following an SB punt, the Chanticleers opened the second quarter with the ball on their 30-yard line. Senior Tyler Santucci, who finished the game with eight tackles, picked up the teams first sack of the night, wrestling Coastal’s Zach MacDowall down to the ground for a 13-yard loss. Two plays later, the weather caused havoc for the Chantilceers’ special teams unit again as punter Ben Erdman could not get the punt off against the SB rush and wound up fumbling, with redshirt freshman Jordan Gush falling on it at the Coastal four-yard line.

A false start penalty and rush of negative five yards backed SB up to its own 14. The Seawolves bounced back quickly, though, as Coulter found sophomore Matt Brevi for five yards before throwing a nine-yard touchdown pass to senior Chris Tyler for the game’s first score.

Following a series of punts, Coastal started its longest drive of the game from their own 36-yard line with 3:42 remaining in the second quarter. After two rushes for negative three yards, MacDowall broke off a 12-yard scamper to put the Chanticleers in a crucial fourth-and-one situation. Following right behind his center, MacDowall plunged forward to pick up the yard and keep the drive alive. On the next play, Santucci was flagged for roughing the passer, which gave Coastal an extra 15 yards and advanced it into Seawolves’ territory. Six plays and six yards later, Durham lined up for his second field goal attempt of the night, a 48-yarder just right of the center of the field. For the second time in as many tries Durham’s kick bounced off the right upright, falling harmlessly to the turf.

SB opened the second half on its own 16-yard line and after a four-yard run from Cuttino, the Seawolves had back-to-back big plays that accounted for 41 yards. Coulter first found Brevi for 19 yard before Cuttino broke off a 29-yard run to the Coastal 32. Four-straight runs netted the Seawolves 12 more yards before the offense stalled. Redshirt freshman Wes Skiffington then converted on his school-record 12th field goal of the season, a line drive from 37-yards out, to give SB a 10-0 cushion.

Three drives later, Coastal finally broke into the scoring column as back-up quarterback Jamie Childers took off on a nine-yard dash, diving into the end zone to pull the Chanticleers within three. Childers completed three passes during the drive for 21 yards while picking up 16 with his legs.

A second interception by Coastal, this one by Carlton Mitchell, gave the Chanticleers a short field to work with, starting this time at the SB 32. SB’s defense stood tough, limiting Coastal to just 11 yards on seven plays, but the third time was the charm for Durham, as he knocked in a 38-yard field goal attempt to knot the score at 10-10.

That would not be the case for long, however, as the Seawolves marched 80 yards in the ensuing drive for a touchdown. SB picked up three-straight first downs at one point, highlighted by a 13-yard completion from Coulter to senior Josh Auerbach. Three plays later, Coulter threw a screen pass to Cuttino who shrugged off a few would-be tacklers on his way to a 28-yard touchdown. A fumbled snap on the extra point attempt left the door open for Coastal, however, as the Seawolves led 16-10.

A 27-yard kickoff return by Tre Henderson gave Coastal solid starting field position at its own 40. A diving 20-yard reception by Brandon Whitley highlighted a drive of 37 yards, which put the Chanticleers at the Seawolves 31 yard line. But on third-and-eight junior Joseph Kirkpatrick came up with a huge sack of 11 yards that drove Coastal back to the 42 and forced a punt.

SB knocked 4:24 off the clock with its ensuing drive and freshman Drew Evangelista came up with another key special teams play for the Seawolves as he pinned the Chanticleers at their own three yard line with a perfectly placed 40-yard punt.

After a pair of runs that netted just one yard, Childers scampered up the middle for five yard before fumbling the ball, which senior Arin West fell on.

Cuttino finished with a season-high 96 yards rushing on 20 carries for SB. Senior Melaquan Saffold pulled in four passes for 51 yards to lead the Seawolves’ receivers, with Coulter finishing 10-for19 for 144 yards and two scores and two interceptions. The SB defense came up with a season-high five sacks, with Kirkpatrick getting one while making a total of three stops behind the line of scrimmage. SB outgained Coastal by a 257-177 margin, with the Chants total yards the fewest allowed by SB this season.

Stony Brook will be back on the road next week for a key Big South matchup, traveling south to take on Gardner-Webb on October 31 in a game between Big South unbeatens. Game time will be at 1:30 pm in Boiling Springs, NC.