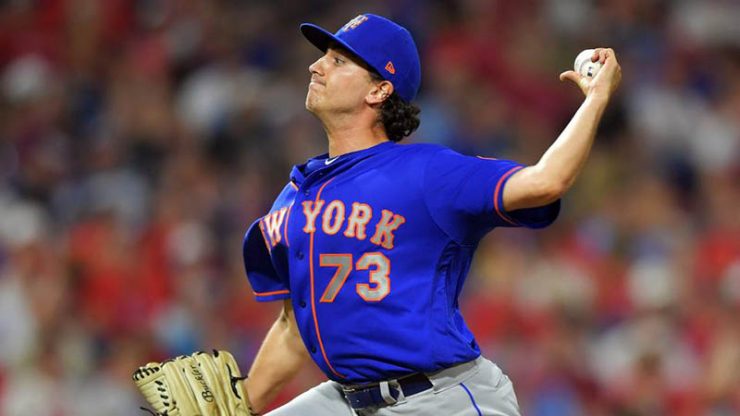 It’s been a black cloud of a season for the New York Mets, but a former Seawolf is now providing a bit of silver lining. With his recent call-up, Dan Zamora ’15 joins a small but elite pack of Seawolves — five, to be exact — who have risen to professional baseball’s highest level.

Although his body of work represents a small sample size to this point, Zamora, a lefty with a three-quarter sidearm delivery, has been battle-tested by some of Major League Baseball’s toughest hitters and emerged mostly unscathed.

Since being called up from the AA Binghamton Rumble Ponies on August 17, Zamora has been thrust into a handful of high-leverage situations. His family was in the ballpark that night as the Mets battled the Philadelphia Phillies at Citizens Bank Park.

“I soaked in the moment before facing my first batter,” recalled Zamora. “Then once I struck him out, I settled down and was able to calm my nerves a little bit.” He wound up going 1-1/3 scoreless innings that night, fanning two Phillies batters in his Major League debut.

In his home debut on August 23 against the San Francisco Giants, Zamora was tasked with getting out of a jam with the go-ahead run at third base and slugger Brandon Belt at the plate. He ended the threat, striking out Belt on a 3-2 pitch after a tough at-bat.

On August 25, “Z,” as he been dubbed throughout much of his career, entered the game against the division rival Washington Nationals, this time facing one of baseball’s most feared hitters and winner of this year’s All-Star Game Home Run Derby, Bryce Harper. Zamora fell behind in the count 2-1 before retiring Harper on a fly ball to centerfield.

Of course, not every battle on a baseball field can be won; two days later Zamora would get an initiation of sorts when Cubs’ slugger Anthony Rizzo took him deep for the first run he would give up in his career. Following that performance, Zamora had tallied six appearances totaling 4 1/3 innings, surrendering only the Rizzo home run.

A native of La Puente, California, Zamora said he must focus on the task at hand — getting batters out — and not let the glamour and high drama of being in the “show” create any illusions about what he is here to do: audition for a spot in the Mets’ 2019 bullpen.

“Coming from AA is a big jump,” said Zamora. “I can’t think ‘I can’t believe I’m here.’ I’m still finding my way but I’m gaining confidence. I’ll be successful if I throw strikes and hit my spots.”

So how does a brand-new call-up prepare for the Big League hitters he has to face? “I learn what I can every way I can and I trust my catchers,” he said. “If someone notices something about a hitter we talk about it.” But he admits he can’t see much of the game from the bullpen. “My job is to be ready to go at any moment.”

Zamora, who was originally drafted by the Pittsburgh Pirates in 2015, called his minor league baseball experience “a grind,” listing the long and uncomfortable bus rides and sub-par fields, clubhouses and hotels as features that “make getting to the Big Leagues that much sweeter.”

The lefty spent three years as a starting pitcher for the Seawolves, contributing nine wins to a Stony Brook team that advanced to the NCAA Regionals in 2015. He missed playing time in his sophomore year following labrum surgery on his left shoulder.

Zamora said that he was a “chubby kid who topped out at 83 miles per hour on the radar gun” until his senior year of high school.

“We won the California State Championship at Dodger Stadium, but 20 minutes after the game, my pitching coach was straight up with me and said, ‘Z, you’re fat. Let’s get you in shape.’

“I took what he told me as a personal challenge,” he said. Part of that challenge was leaving fast food and soda behind and adopting a stepped-up workout regimen.

When Zamora got to Stony Brook, he developed a strong connection with pitching coach Mike Marron, who convinced him to trust his breaking pitches, something he features more than 75 percent of the time.

“In addition to honing my craft, Stony Brook made me a better person, said Zamora. I grew up a lot there,” said Zamora, who made sure Seawolves Head Coach Matt Senk was there to see him in his home debut at Citi Field. “I got him on the field for batting practice,” he said.

“I worked my whole life to get here,” said Zamora, who left Stony Brook after his junior year to enter the baseball draft and pursue his dream. Ironically, he had just enrolled in classes online to finish his B. A. in multidisciplinary studies when the Mets came calling.

“This is my number one priority. School is going to have to wait. But I am going to teach special needs children someday, whether it is when I am 27 or 45,” said the 25-year-old rookie.

Hopefully both dreams will come true. But not before The Rookie becomes The Natural.