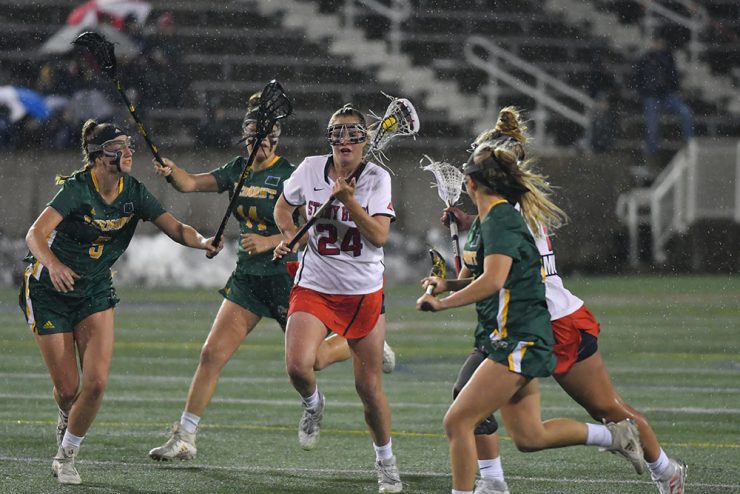 “The more things change, the more they stay the same,” so said French journalist Jean-Baptiste Karr way back in 1849.  While Karr likely wasn’t thinking about Division I Women’s Lacrosse 170 years hence when he made that statement, he may as well have been describing the 2019 Seawolves.

2018 was a historic year for the Stony Brook Women’s Lacrosse program. The team was ranked Number One in all the polls most of the season before suffering a heartbreaking overtime loss to Boston College in the opening round of the playoffs, finishing the season 20-1 – the best season in the team’s history.

That team was anchored by prolific scorers Kylie Ohlmiller and Courtney Murphy, the latter of whom set the NCAA career goals record along the way, finishing her college career with 341. They are just two of the 10 seniors and six starters that have moved on. But don’t expect Coach Joe Spallina to lower his expectations for 2019.

“Our goal is winning a national championship,” Spallina said emphatically. “The day I stop saying that is the day I stop coaching.”

Indeed, Spallina has been planning for this since the day he was hired to lead the Seawolves in June 2011.

“You coach a team, but you build a program,” he said. “We were ranked 70th out of 82 programs when I took over. Now we’re selling a vision, and we’ve just got to follow the blueprint we’ve set.”  They head into the first game of the 2019 season at number four on the NCAA rankings, a testament to the progress the program has made in eight short years.

Even with the loss of key impact players, neither the team nor the program has skipped a beat. In fact, it’s quite the opposite. The 2019 squad boast two members of Team USA – senior midfielder Mackenzie Burns and junior midfielder Ally Kennedy – and has attracted high-end transfers that nicely fit the team personality, something the program hasn’t had the luxury of relying on in the past.

“The deep Long Island talent pool has been a big part of helping us get to where we are, but over the years we’ve put ourselves in a position to attract high-end talent, and what’s happened this year is an example of that,” said Spallina. “This program gives us a chance to keep the best players on Long Island home, and now we’ve also attracted top players from Texas, Arizona, Canada, and other places.”

Nicole Barretta, a senior attacker who transferred from Temple, is one of those players.

“I had one more year of eligibility and I didn’t feel like I was realizing my potential,” she said. “After watching the Stony Brook/Boston College playoff game I knew that I would be a good fit here and I wanted to be part of the program.”

Mikayla Dwyer, a freshman transfer from Bryant (RI), is another example of the program’s strength. The Shoreham native wanted to be closer to home and Stony Brook’s nationally recognized program was enticing.

“It can be intimidating coming on to a team like this,” said midfielder Dwyer. “But everyone has been great and I’m excited that Coach Spallina gave me the chance to be part of it.” Freshman defender Deanna Weisenburger echoes that sentiment.

“This is one of the biggest challenges I’ve ever had,” said the Garden City native. “I’ve been pushed to new limits. Coach Spallina gets it out of you and makes you the best you can be.”

As for the returning players, last year’s taste of success only whet the collective appetite for greater things in 2019.

“Last year made me hungry,” said junior midfielder Ally Kennedy. “I was heartbroken after that playoff game, and it made me work to come back in the best shape I’ve ever been. I want to lead this team to where it deserves to be.”

“I was lucky to have great juniors and seniors to look up to last season,” she said. “This year I want to be a role model to the younger players just like teammates like Ally were for me.”

Gabby Abbadessa, a freshman midfielder from Arizona is another example of Stony Brook’s growing national reach.

“I played on club teams in Colorado because lacrosse isn’t popular where I grew up in Arizona,” she said.  “My coach on the club team knew Coach Spallina, and I fell in love with the school and the program.”

The team opens the season on Friday, February 22 with a game against the University of Colorado in Boulder, and takes on Denver University in Denver on Sunday. Abbadessa is particularly excited to open the season out west because her family will make the short trip from Arizona.

For midfielder Keri McCarthy, one of nine returning seniors, 2019 represents the last chance to complete some unfinished business before her college career ends.

“I want to go out with a bang,” said McCarthy. “Last season put a chip on our shoulder. People maybe don’t expect us to be as good this year, but we’ve got talent. I’m really excited about this season.”

“You can’t not be disappointed by the way last season ended, especially after being ranked number one most of the year,” added Spallina. “But even with the talent we’ve lost, we’ll start the season in the top five and we’ve got the potential to be much better. We try to be the gold standard as far as Stony Brook Athletics goes, and we take pride in our effort to do exactly that.”