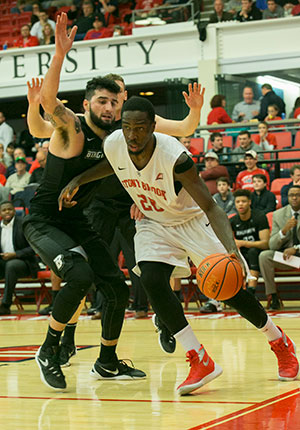 As the Seawolves won their 17th straight game — further stretching the longest winning streak in Division I basketball — the national sports press took notice. Suddenly, publications ranging from Sports Illustrated to College Insider are liking Stony Brook’s chances to land a first-round slot in the Big Dance — and maybe more.

On February 11, 2016, the Seawolves vanquished UMBC, 75-52, as America East star Jameel Warney recorded his 13th 20-point game of the season. With the victory, Stony Brook also consolidated their reputation as road warriors.

“Last year we didn’t win our first road game until after Christmas,” Warney said. “To win 10 games on the road is great. We understand how tough it is to win on the road so we try to stay tough and together.”

Earlier this week, Warney, a senior from Plainfield, N.J., enjoyed the best game of his career, scoring a career-high 36 points to lead the Stony Brook men’s basketball team to a 85-72 win over Hartford on February 8.

This could be “the year Stony Brook finally breaks through,” Sports Illustrated speculates in a story that throws the spotlight on Warney’s contributions on both ends of the court.

Warney, SI points out, is No. 10 on kenpom.com’s respected national player of the year metric and is the only mid-major player to make the Top Ten.

Next up for the Seawolves is a Valentine’s Day home matchup vs. New Hampshire, followed by a February 17 road game against Albany, in what just might be a preview of the America East finals.