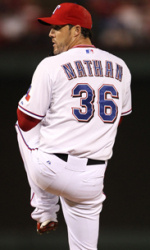 After closing the 84th MLB All-Star Game on July 16, Texas Rangers star Joe Nathan ’97 talked to Newsday about how Stony Brook gave him the opportunity to grow as a person and a player. Nathan, who played for Stony Brook from 1993 to 1995, earned the save for Yankee legend Mariano Rivera by pitching a scoreless ninth inning in the American League’s 3-0 victory over the National League at Citi Field.

Nathan described his heart-pounding night closing for the greatest closer of all time, and how much he looks up to Rivera, then went on to say how Stony Brook was the perfect fit for him.

While with the Seawolves, Nathan hit .378 and was a two-time Academic All-American. He was inducted to the Stony Brook Hall of Fame in 2006 when he became the first former Stony Brook student-athlete to have his number retired. Stony Brook renamed its baseball facility Joe Nathan Field after Nathan donated the lead gift that led to the park’s renovation.