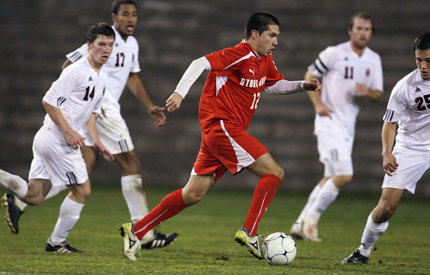 Despite battling Brown for more than 103 minutes and giving all it had, the Stony Brook men’s soccer team fell to the Bears, 1-0, in the first round of the NCAA College Cup on November 19. Sean Rosa scored three minutes into double overtime for Brown. It was the first goal the Seawolves had given up in more than 400 minutes of action. Stony Brook ends its season 6-10-4.

“I was proud of the team’s effort,” head coach Cesar Markovic said. “We gave everything we had but came up a bit short.”

The team won the America East Championship after defeating UMBC on November 15, which advanced them to the first round of the NCAA Championship Tournament.

Along with freshman Anthony Rogic, who was named the America East Championship’s Most Outstanding Player, seniors Collin Geoghegan and Damion Brown along with junior Greg Tinari were named to the All-Championship Team.