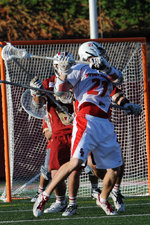 A standing-room only crowd of more than 10,000 saw eighth-seeded Stony Brook rally from a four-goal deficit in the first half, but Virginia’s Chris Bocklet and Shamel Bratton each scored three goals to lead the Cavaliers to a 10-9 win in an NCAA Quarterfinal at Kenneth P. LaValle Stadium on May 23. Junior Kevin Crowley and sophomore Kyle Belton had two goals apiece for the Seawolves (13-4). Sophomore Robbie Campbell added a goal and two assists.

“I’m so proud of our guys,” Head Coach Rick Sowell said. “We had a goal a year ago and accomplished that and then some. I was confident that our guys would show up and play and they did that. This was one heck of a journey.”

Crowley, the 2010 America East Player of the Year and a Tewaaraton Award finalist, became Stony Brook all-time leading goal scorer in a season with 51 and finished his outstanding season with 77 points.

Senior Charlie Paar (10 saves) made three point-blank stops in the beginning minutes of the game to fire up the pro-Stony Brook crowd, but Shamel Bratton got free for a shot and scored to make it 1-0 just under three minutes into the game.

Crowley helped Stony Brook get on the board when he found sophomore Jared LeVerne in transition for his third goal of the season. But it was all Virginia (16-1) after that, as four different players scored goals to give the Cavaliers a 5-1 lead.

The Seawolves went 17 minutes without a goal, but they roared back in a big way. Sophomore Timmy Trenkle dodged to the left of the crease and scored to make it 5-2. Less than two minutes later, Belton took Campbell’s pass and put it past Virginia goalie Adam Ghitelman (13 saves). Ghitelman made six stops in the second quarter, but it was Stony Brook that entered the locker room with momentum despite a two-goal deficit.

Junior Adam Rand, who completely dominated the face-offs against Virginia, won 9 of 10 draws in the first half. He finished the game with 18 of 23.

Over a minute and a half into the second half, the crowd jumped to its feet when Campbell scored unassisted to get Stony Brook within one. Crowley completed the comeback, taking a pass from junior Jordan McBride and scoring right on the door step to tie the game at five.

Virginia, which didn’t score for more than 25 minutes of game action, ended the drought when Bocklet’s shot glanced off Paar and in. Bocklet scored with 45 seconds left in the third quarter to make it 7-5.

Six seconds into the fourth quarter, Belton raked the ball past Ghitelman for his 23rd goal of the season, a career best. Off the ensuing face-off, senior Steven Waldeck eventually scooped up the ground ball and sent the crowd into a frenzy with his 10th goal of the season, tying the game at seven.

After Bratton made it 8-7, Crowley, running to his right, ripped a shot to tie the game for the fourth time. But Bocklet regained the lead for UVa, scoring off a pass from Mikey Thompson in transition.

Senior Tom Compitello made things interesting when he came out from behind the cage and beat Ghitelman low for the score. Stony Brook won the ensuing face-off and Campbell got off a shot but it went wide. A failed clear set the Seawolves up in the waning moments, but McBride’s low-angle shot with 25 seconds left was saved and Virginia eventually ran the clock out.

Waldeck finished his illustrious career with 313 ground balls, including 112 in 2010, the third most in school history. Among all long poles, he led the country with 10 goals and four assists. The long stick midfielder finished his four-year career with 17 goals and 11 assists.

Paar ended the season with a 9.55 goals against average and .562 save percentage. His 13 wins this season are the most by a goalie in school history.