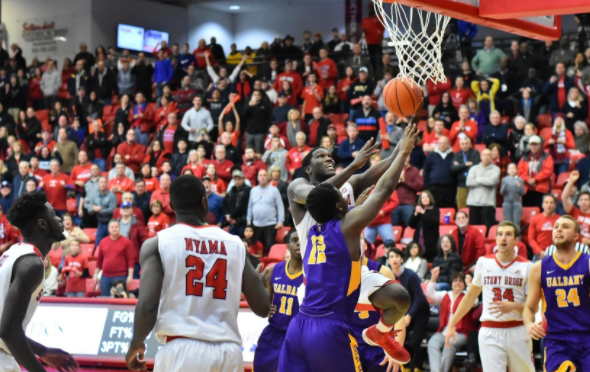 The Stony Brook men’s basketball team battled back after being down 21 points late in the second half to knock off the Albany Great Danes, 72-70, in the final second at Island Federal Credit Union Arena Sunday afternoon.

Junior Tyrell Sturdivant (Chester, Pa.) hit the game-winner with 0.6 on the clock to move the Seawolves to 7-8 on the year and 2-0 in America East. Albany now sits at 9-8 on the season and 0-2 in league play.

“What a welcome to the rivalry,” said head coach Jeff Boals after the victory. “I think the fact that this was the ninth time this season a game has come down to the final shot paid dividends for us. Guys didn’t panic when we got down, they kept fighting and we kept chipping away. I’m really proud of the way we played in the last eight minutes, the fight and the grit that they had.”